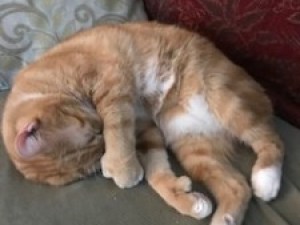 How Roman spends a snow day.

I’m happy to report that, after receiving what must have been some pretty convincing feedback from readers (thanks to everyone who took the time to weigh in), the “powers that be” at the Bethel Citizen have rescinded their rather draconian cuts to the length and content of the local correspondents’ columns. Beginning next week, we will be allowed up to 500 words, and will be permitted to report not only on events in our towns, but also “any personal news we’d like to share.”

This means it probably won’t be necessary for me to use this space to offer an expanded version of my weekly newspaper column, but since my blog has gained some new and appreciative readers over the past couple of weeks, I’m going to try to post here as often as I can. So please keep coming back, and, if you’d like, you can receive an email letting you know when I post a new entry—just click on the “Subscribe to Blog via Email” link to the right of this post and enter your email address. Thanks for reading!

The Greenwood Farmers’ Market will be held this Friday, Jan. 11, from 4-6 p.m. at the Town Hall on Main Street, after which it will switch to the winter schedule of every other Friday afternoon. The next few market dates after the switch will be Jan. 25, Feb. 8 and 22, and March 8 and 22.

Winter market dates will coincide with the Boondocks Buying Club pickup. Boondocks provides another opportunity for people to buy fresh, local food by joining with others to buy in bulk, and has been going strong for several years. The bulk order, which is received every two weeks, is divided up by volunteers for members to pick up at the Town Hall. If you haven’t heard about Boondocks, you may want to come to the market to find out more, visit their Facebook page, or speak to a member about how to join.

I had hoped to bake cookies and whoopie pies for last Friday’s market, but I got home from work on Thursday to find that my oven had died. Well, technically, there was probably nothing wrong with the oven itself, but the computerized control panel had given up the ghost.

I’d known for some time that it was on its way out, because several times in the past few months I’d had to unplug the range to get the control panel to reset itself and start working again. But this time it was completely done for, and no amount of unplugging, replugging, and button-pushing would get it to respond. (Not even bad words helped.)

Having been told that once the control panel goes on an electric range, it’s not worth replacing, I had to prevail upon Tony to make a trip to Auburn with me on Friday afternoon to pick up a new one. (There are probably people who can get along just fine without an oven for a while, but I’m not one of them.)

This time, I went with a stripped-down model, the only one I could find without digital controls. Without a computer to break down, there isn’t much that can go wrong with an electric range that can’t be cured by replacing an element. My new one is so basic that it doesn’t even have a clock or timer, so I had to pick up a battery-operated one, but I’m hoping its simplicity will mean it will last a good long time.

Remember the days when even small kitchen appliances were worth taking in for repair? I think my mother had the same toaster for about 30 years, and I recall going with her at least once to drop it off to be repaired when something went wrong with it. And I’m pretty sure the stove she used at camp for 40 years, from the mid-1950s until the mid-1990s, was one she and my father had acquired for their first home when they were married in 1942.

Nowadays it seems as if I replace my toaster almost as often as I replace my toothbrush, and I shop for major appliances more often than my mother shopped for a new toaster or mixer. With all of those appliances, large and small, ending up in landfills, no wonder the disposal of our solid waste is one of our biggest environmental challenges.

But, anyway, I’m back in the baking business, and, whether or not I’m able to be at the Farmers’ Market in person in the coming weeks, I’ll have frozen pies, and probably other baked goods, too, in the Town Hall freezer, available for purchase from Michelle Shutty of Greenwood Bean Coffee or Suzanne Dunham of Dunham Farm and Velvet Hollow Sugarworks.

Since I now work all day on Tuesdays, Wednesdays, and Thursdays—mornings in the office at the Museums of the Bethel Historical Society, and afternoons in the Adult Education Learning Center at Telstar—it was a few days into 2019 before I was able to fit in my first hike of the new year, but then I managed to take a different short hike three days in a row.

On Saturday, Will, Eli, and I hiked up to Lapham Ledge. There were three other cars in the parking lot on Route 26, and the last time we had hiked at Maggie’s Nature Park, there were two other cars there. It’s great to see people using our local trails year-round! I’m glad that Greenwood has formed a Conservation Commission to help ensure that trails are maintained, as well as to oversee cleanup along the roads and at the Town Beach. Thanks to Betsey Foster for getting the ball rolling, and for being one of the Commission’s first members, along with Norman Milliard and Mark Plourde. (And thanks to Woodstock Conservation Commission member Jane Chandler for setting such a good example.)

Sunday was a Community Ski Day at Sunday River, and Will decided to go snowboarding, so Eli and I went for a hike up to Buck’s Ledge. I parked my car on Rocky Road and we walked to the trailhead on the Mann Road to take the shorter, steeper ascent, then we hiked down to the snowmobile trail that leads back to the Mann Road, and from there back to the car. We met a guy at the top who had hiked up from the parking lot near the spring, packing a collapsible camp chair with him. He was sitting there enjoying the view and, I’m sure, the peace and solitude—at least until Eli showed up and I had to caution him to hold on tightly to his gloves, hat, and anything else a rather undisciplined young dog might run off with.

On Monday, while Will was working his weekly shift at the library at Sabbathday Lake Shaker Village, Eli and I hiked up Peaked Mountain in Maggie’s Nature Park. We extended the usual two-mile round trip by about an extra three-quarters of a mile by taking the blue trail loop before joining the yellow trail that leads to the top. 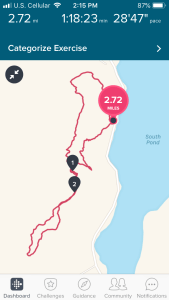 I was able to do all three of my first hikes of 2019 with Microspikes, but after our Tuesday/Wednesday storm(s), it looks like snowshoes will be the way to go for a while, at least until the trails have been well broken out.

I’m glad to have some fresh snow, at least now that we’ve gotten it cleared out of the driveway and walkways, but I think there’s probably some roof-shoveling in my future. One of the joys of home ownership—I’ve never needed a gym membership!

Please send me your local news via email at amy.w.chapman@gmail.com, by phone at 207-890-4812, or find me on Facebook or in person around town. Thanks for reading! 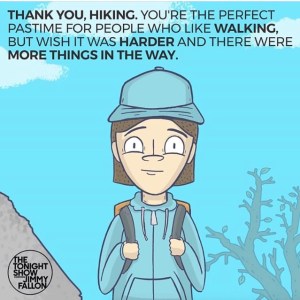 One thought on “Some good news for local columns!”