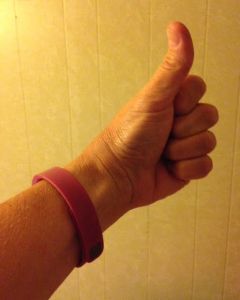 For the past six months, I’ve been working pretty hard to get fit and healthy, and it’s been going surprisingly well. I say “surprisingly” because, like so many other people, I’ve tried and failed repeatedly to get in shape throughout my life.

Today I got this Facebook message from a friend: 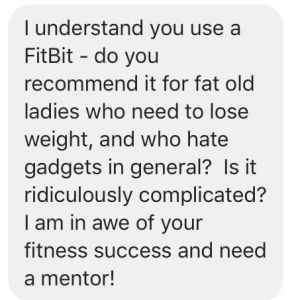 It’s true, I’ve been using a FitBit Flex, which I put on my wrist the day after I received it from my kids for my birthday last March, and have removed very rarely, except to charge it, since then. Although I resisted the activity tracker craze for quite a while, my FitBit has turned out to be just the gimmick I needed, and I usually tell people it’s the key to my success.

I never in my life thought I would hear words like “in awe of your fitness success” directed at me. I started to reply right away, but my enthusiastic message got so long that I told my friend I was going to turn my reply into a blog post instead. So here it is—my wholehearted endorsement of a gadget I didn’t know I needed until I put it on.

Ha! I’ve certainly never considered myself a mentor when it comes to fitness, and I’m not sure that 40+ years of mostly hopeless struggle to lose weight followed by 6 months of relative success qualifies me to dispense advice! But I will say that something about the FitBit has really clicked for me.

I don’t necessarily think using a FitBit will work for everyone the way it has (apparently, so far, fingers crossed) worked for me, because I think when it comes to getting in shape, everyone responds to different techniques, but I’ll tell you what I like about it and why it seems to be a good choice for me.

I’ve heard for years that the key to “changing your relationship with food” (which we all used to call “going on a diet,” until we finally started to figure out that diets don’t work—let’s repeat that together: “Diets don’t work!”) is avoiding mindless eating.

Some method of keeping track of food was in order. I’ve never successfully tracked what I eat for more than about a day (I used to use a notebook and pen, but that was never going to last), but I find it easy enough with the FitBit program on my iPhone that I’ve been doing it every day for 6 months now. Every. Single. Day. And I don’t hate it.

Virtually anything you’d ever want to eat is in the database already, and you can usually choose from several ways to measure portions–grams, ounces, tablespoons, cups, or something like “1/8 of a large pizza.” It really only takes me a total of a few minutes a day to enter everything I eat, and I’m pretty scrupulous about it.

I’m finally figuring out what normal portions look like, although it took a while. For the first couple of months, I felt like I was eating toddler portions, and I realized (aughhhh!) I’ve probably been eating double and triple portions of many things for most of my life.

As long as I can get that portion thing down, I don’t have to make anything off-limits—not even bread, butter, chocolate, cheese, ice cream, or cheesecake—and because of that, this is the first time in my life that I can remember losing weight successfully without feeling deprived.

I once, 20 years or so ago, lost 35 pounds (mainly by seriously restricting all forms of fat) and promptly gained it all back because I viewed it as a “diet” instead of a “lifestyle change” (that’s an overused catchphrase, but apt).

On this plan, if I want peanut butter, chocolate, and cheese, I eat them. And I know if I want them again tomorrow, I can eat them again then. It’s amazing the psychological difference that makes.

I like being able to see how many calories I have left for the day…I confess to being a bit of a calorie hoarder, especially if we have company or I’m planning a special dinner. Even though it’s probably healthier overall to eat more calories earlier in the day, I like going into late afternoon with upwards of 1000 calories left—it feels like going shopping with plenty of cash in my wallet.

I love being able to make the connection between activity and calories burned. If I’m more active, I get to eat more. It sounds simple, but I guess I needed to see the actual numbers to have it click.

I like having daily goals for steps, miles, and calories burned. I can be a little compulsive when it comes to streaks (when I started this, I already had an unbroken streak of almost four years without missing a single day of exercising for at least 30 minutes, although it hadn’t helped me lose any weight), so I just kept 30 active minutes as my goal. But I almost always end up with between 60 and 120 minutes a day now, and I always meet my step goal (10k) because, again, I’m a bit compulsive.

I really like wearing my FitBit at night and tracking sleep, because it makes me feel completely justified about being a cranky bitch if I can look at my sleep record and say, “No wonder I’m a cranky bitch; I was awake five times and restless all night!”

Maybe it’s just me, but I love having something new to blame for my crankiness, having badly overused the usual culprits (hormones, hot flashes, husband, and housekeeping) for years now.

The Flex, which cost around $100 six months ago, is down to about $80 now, and that’s a damn good deal. I’m not much of a gadget person myself, but if my FitBit were to suddenly stop working (I’ve had no trouble at all with it so far), I’d get another one in a minute.

So there you go. 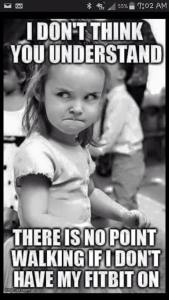