It seems that almost everyone has a flying squirrel story. Here’s mine, along with a few of the dozens of comments, stories, and dire warnings I received when I posted my photo on the Maine Wildlife Facebook page.

When I got up a few mornings ago and found several balls and skeins of yarn knocked to the floor from the cubbies in the spare bedroom where I store my fairly extensive yarn stash (every knitter has one), I naturally blamed the cats. After all, when plastic bags end up strewn around the house, or when pens, paper clips, TV remotes, and cell phones mysteriously disappear and turn up under the couch, they’re the usual culprits.

I had just started picking up the yarn and stuffing it back into the cubby with the rest of the stash when there was a frantic scrabbling from behind the skeins, and I suddenly found myself face to face with a flying squirrel. 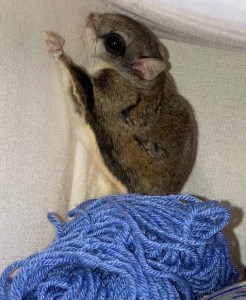 in your yarn cubby, even if that wild animal is all eyes and ears, small and furry, and very, very cute.

I’m not sure which of us was more alarmed. I may have jumped and shrieked a bit; he didn’t. In fact, he froze in place for long enough for me to get my phone and take several photos (because, you know, Facebook-or-it-didn’t-happen, right?).

He even stayed frozen long enough for me to go to the basement stairway and locate the old fishnet that came with the house when Tony bought it 35 years ago. (Although the previous owners had never specifically mentioned sharing their home with assorted wildlife, it probably should have been a sign when he discovered that they had kept a net conveniently close by.)

Although it hasn’t worked

for mice, red squirrels, or the ermine that found its way inside one winter, we’ve successfully used this net to remove errant bats on a number of occasions. When netted, bats usually fall obligingly into the narrow pouch at the bottom of the net and stay there until they can be released outside. 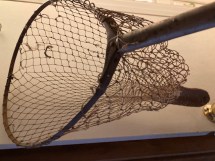 It turns out that flying squirrels, when netted, do not fall obligingly into the bottom of the net. Instead, they cling 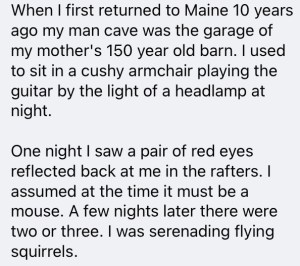 desperately to the mesh with the teeny, tiny claws on their teeny, tiny fingers and toes, refuse to be shaken down, and leap out at the first opportunity, sometimes straight at the face of the person holding the handle of the net.

This is disconcerting, to say the least, when one is that person.

Getting this furry invader into the net, at least at first, wasn’t the problem, but keeping him in the net turned out to be impossible. By the time he had escaped and been recaptured a couple of times, all three cats had come tearing upstairs and were following the proceedings with opportunistic interest, and I was just about equally afraid of having a flying squirrel attach itself to my face or having to watch the violent demise of my inarguably adorable new friend at the hands (and claws, and teeth) of the three vicious killers with whom I willingly share my home. 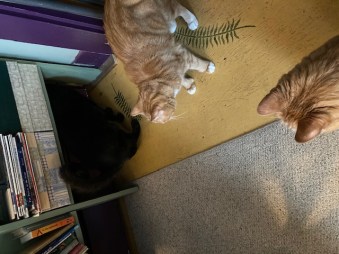 Although I had the idea that I could grab a nearby towel, throw it over the net, and carry it downstairs to the door, I would have needed at least one more hand, or a couple less cats underfoot, to accomplish this.

I should mention that this is not my first flying squirrel rodeo. Every year, from late fall until early spring, the cats and I occasionally hear something running around in the walls and attic, and every time I hear it I think, gee, that sounds too big to be a mouse.

space filled with nothing but insulation and, I guess we can assume, rodent nesting material and probably more rodent poop than I care to contemplate), when I’m not actually confronted by a flying squirrel in my living space, I can maintain a blissful state of denial. (It’s even easier for Tony,

who is too hard of hearing to notice the scrabbling noises. And as for the cats, as long as the invaders stay out of sight, the mystery of “What the Heck Is in the Wall?” just adds a little excitement to their dull indoor lives.)

The first time I actually saw one was two years ago. I was sitting in the living room, reading, when it emerged from who-knows-where to eat a bit of leftover cat food at the foot of the stairs. The cats didn’t happen to be in the room, and the squirrel and I both chose to pretend we hadn’t seen one another.

Since then, I’ve come upstairs more than once to find one or more cats stationed outside our bedroom closet, leading to me to believe our house guests have a secret pathway somewhere in there that lets them go back and forth from the attic, although I’ve looked for it to no avail. 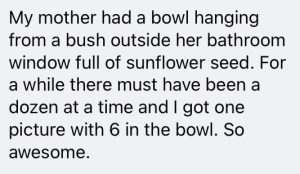 After a few failed attempts with the net, the squirrel ran into our bedroom and disappeared under the bed. By the time I had pulled everything out from under the bed, it had relocated to under the dresser, in a space too small for the cats to squeeze into, which is where I left it, since I had to get to work. 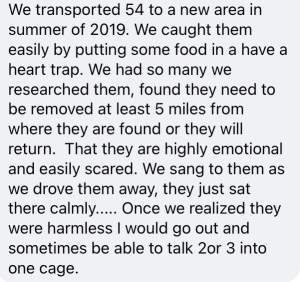 When I got home, there was no sign of a living squirrel and, I was glad to see, no sign that the cats had caught up with him while I was gone. In fact, everything seemed back to normal, so I concluded that our furry friend had found his way safely outside or, more likely, back to the attic.

The next morning, however, I came downstairs to find all three cats staring intently up at Tony’s jacket, which he had hung over the top of the open door to his office. Then I noticed that the jacket was moving, ever so slightly, as if swaying in a breeze. Our house is old and drafty, but not that drafty, so I had a pretty good idea what was going on. 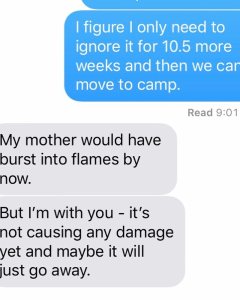 I thought maybe I could reach up, gather up the jacket, yank open the outside door, and toss the jacket, squirrel and all, out onto the doorstep.

With one hand on the doorknob, I cautiously lifted the jacket, only to find the panic-stricken rodent clinging to the edge of the door. He took one look at me and, clearly remembering the net episode of the day before, launched himself off the door and into Tony’s office, with the cats in hot pursuit. 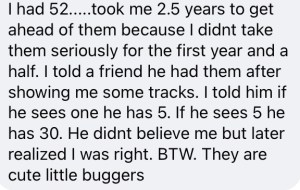 He made a couple of laps around the room before jumping into an empty cardboard box, which I quickly upended, but not before he had shot out from underneath it and headed down the basement stairs with Roman close behind him.

I ran down after them in time to see the squirrel make it safely through the chicken-wire wall that separates the cat-friendly zone of the basement from the cat-free zone.

Convinced he was safe for the moment, and already late (for the second morning in a row), I left for work, after 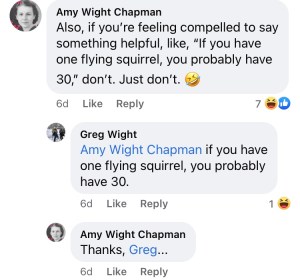 filling Tony in on the latest developments.

A couple of hours later, he called to say that the squirrel had come back up from the basement and led him and the 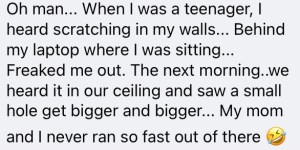 cats on yet another chase. He was finally able to trap it by cornering it in the bathroom and upending Eli’s food dish over it, then sliding a piece of cardboard underneath. He escorted it out the door, and reported that it was last seen racing away over the snow.

I’m sure it was back inside by the time I got home from work. 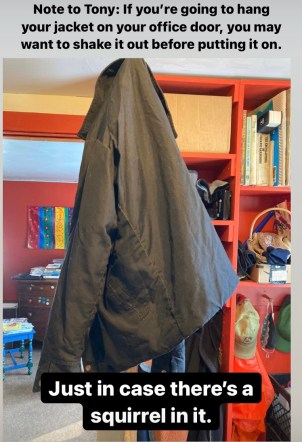