Change is hard. Last month, I mourned the closing of Norway, Maine’s 170-year-old independently owned hardware store, L.M. Longley & Son. Yesterday, I was saddened to read of the passing of its longtime owner, John Longley. A couple of years back, I interviewed John and wrote this piece. Although I wasn’t able to find a home for it, and it lost its relevance with the closing of the store, I’m posting it here to honor a good man and the business he nurtured for more than half a century. They will both be missed. 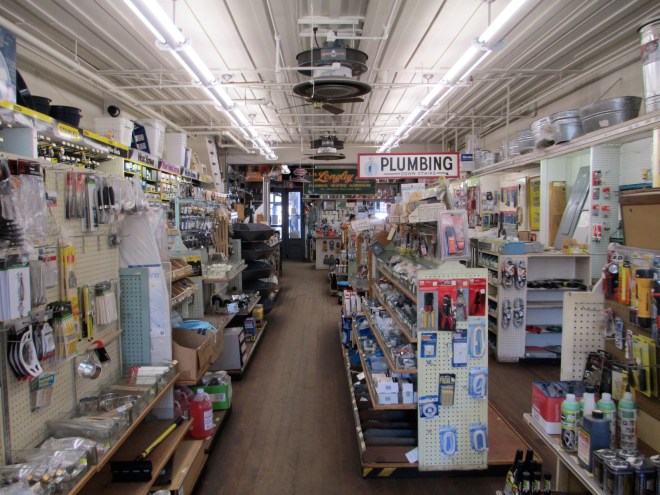 For well over a century and a half, residents of western Maine’s Oxford Hills have relied on a hardware store in downtown Norway for the parts and pieces, tools and supplies needed to keep their homes and businesses running smoothly.

The site on Main Street that is home to L.M. Longley & Son Hardware has been occupied continuously by a hardware store since 1844, when J.O. Crooker founded his business there during the fledgling town’s first half-century. The current six thousand-square-foot brick Greek Revival structure was constructed in 1867, and was one of only a few buildings to survive the devastating downtown fire of 1894, a wind-whipped conflagration that quickly wiped out more than eighty homes and businesses.

Iconic local businessman John Longley represents the third generation of Longleys to oversee the family company. At eighty-four, he continues to work six days a week, commuting from his home in Casco to supervise day-to-day operations.

On the day I visit, John has disappeared into the basement catacombs in search of parts needed for a plumbing service call. When he emerges, he’s clearly busy, distracted by the never-ending details of running a business that includes retail sales, plumbing and heating installation and repairs, and custom sheet metal fabrication.

It’s also clear that he’s not a man who welcomes interruptions. He’s not sure he really wants to talk to me, but after decades of serving the public, he’s too polite to say so. He agrees to let me ask “a couple of questions. Then I’ll decide about more.”

Searching for a hook that will win him over, I tell him I’ve had a lifelong passion for independently owned small businesses, especially hardware stores. I hope this doesn’t sound like shameless pandering, but it happens to be true. Just let me set foot on the oil-blackened hardwood floor of a century-old hardware store, and I’m transported back to the simpler days of the early twentieth century, as surely as if I had actually experienced them. In fact, when I was sixteen, in a letter to my older brother, I wrote that I didn’t know why I needed to go to college, when what I really wanted to do with my life was work in a hardware store.

John raises one eyebrow at this, but then he says, “Okay, I’ll give you fifteen minutes. And I’ll show you the metal fabrication shop, since you’ve expressed an interest.” Apparently, I’ve passed the first test.

In the end, he shows me everything—his office upstairs, the metal shop downstairs, the shelves and drawers and rows of stovepipe, plumbing parts, nuts, bolts, and washers—and we talk nonstop for more than an hour.

John’s grandfather, Leon M. Longley, grew up in a hardscrabble farming family in Raymond, but he envisioned a different sort of life. As the nineteenth century drew to a close, Leon left Maine for Massachusetts to train as a plumber. Returning home in 1898, he loaded some tools on his bicycle and rode from the family farm to bustling downtown Norway in search of work.

A talent for the plumbing trade, coupled with his natural business acumen and a growing need for skilled tradesmen in the rapidly expanding town, helped to make Leon a swift success. By 1902, when his son Forrest was born, he was well established, and he and his partner Ralph Butts had moved their business into the former J.O. Crooker Hardware building on Main Street. They renamed the store Longley & Butts, combining the retail hardware and plumbing businesses under one roof.

In the 1920s, Forrest Longley, who had gone to Boston to attend the Wentworth Institute, returned home to join his father in the business. By then, Ralph Butts had retired and the store’s name was changed to L. M. Longley & Son.

John, Forrest’s son, grew up in the business, working in the store and helping with deliveries and service calls. “I guess I always knew I’d end up here,” he says. But before settling in at the store, he tested the waters beyond his hometown. After graduating from the University of Maine with an engineering degree in the early 1950s, he served in the Army, then spent the rest of that decade working as an industrial engineer in the Midwest.

In 1960, he returned to Maine and went to work for his father in the hardware business. “I got my state licenses for plumbing and heating,” he says, noting that at one time the business employed as many as four plumbers. “Now we have one, and one heating guy, plus a guy who does sheet metal fabrication—he works part-time.”

For decades, the Longleys also ran a fuel oil business, but the complexity of ever-changing environmental regulations forced John to give that up a few years ago. “The business was kind of like a three-legged stool,” he explains, “with the plumbing and heating, the store, and the fuel business. Now the two legs that are left have to keep it propped up.”

Most of the store’s employees are part-timers who have retired from other careers. “I work here three days a week,” Earle Thompson, the genial older man at the register, tells me. “But I worked at Western Auto, just down the block, for forty years, so I’ve spent my whole career here on Main Street.”

More than anything else, customer service is what sets an independently owned hardware store apart from its chain-store competitors. L.M. Longley’s seasoned staff doesn’t hesitate to go the extra mile to locate a hard-to-find item, whether that means digging through stock in the cavernous basement or in one of the three bulging warehouses located behind the store, clambering up to a high shelf along one wall of the long, narrow retail space, or doing a computer search of suppliers.

At the counter, I mention to John and one of his employees, Dick Parsons, that I’ve been searching in vain for a particular type of garden rake for my husband, one with an ergonomically-friendly teardrop-shaped—rather than round—handle. They both look a bit puzzled, but twenty minutes later, as John and I are wrapping up our conversation, Dick comes to the office door, grinning and triumphantly holding aloft a garden rake. It’s exactly what I’ve been looking for.

I tell John that his track record with me is still perfect: over the years, anything I’ve come into his store looking for—a galvanized bucket, a lamp chimney, plumbing parts, or a doughnut cutter—his employees have been able to unearth for me.

He thanks me, nodding, and adds, “We try to stay current. If we don’t have what people need, we try to get it for them. This business doesn’t create a big flow of cash—it’s certainly not a gold mine—but it fills what I think is an important niche.”