My mom, Ruth Elizabeth White Wight, was born on a Friday the 13th, a century ago today. 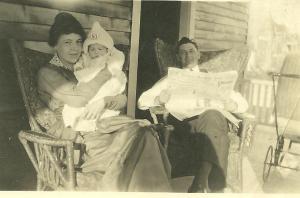 She was the eldest of four children born to Leon George and Laura Marcella Trundy White, and the only girl.

Although her parents were living in Bangor, she was born at her grandparents’ home in Searsport. Her mother had gone there to await her arrival, because her father, who worked for the Great Northern Paper Company, spent the work week driving around to remote logging camps to deliver the payroll, coming home on Friday evening and leaving again on Monday morning.

The first of her brothers, Leon Jr. (whom my grandfather called Junior, but everyone else called Shume) was born just 13 months later. Her next brother, Don, arrived three and a half years after that, and Gib was born five years after Don, nearly ten years after my mother.

From what Mom could piece together about a subject that was only ever discussed in whispers, my grandmother suffered from “female trouble” and never fully recovered after delivering her last child. Seven months later, she ended up in the hospital. After a few days, she seemed to be improving, and my mother, as the oldest, was allowed a short visit.

My grandmother was sitting up in a chair, and she told my mom that she was much better and might be able to get up and walk a bit by the next day, and to come home soon after that.

She said, “Ruthie, your hair’s hanging in your eyes!” and, taking a bobby pin from her own hair, she pinned up the errant strands of my ten-year-old mother’s unruly black hair.

The next day, my grandmother suffered a sudden hemorrhage and died.

“I kept that bobby pin for years,” my mother told me, not long before her own death. In fact, she said, it had been in her jewelry box for seven decades, disappearing, somehow, only recently.

(When, later, my sister and I were sorting through her clothing and jewelry, we ran across several bobby pins, caught in the crevices of drawers or tangled in the chains of necklaces. With each one we found, I caught my breath, wondering…but they all looked the same, and who could tell?) 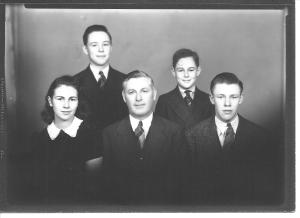 Thus, at the age of ten, my mother became a caretaker, and a stoic. She helped with her younger brothers, changed the baby’s diapers, and endured a series of live-in housekeepers who were paid to keep the laundry done and the floors clean and the children fed, but not to nurture them, listen to them, or love them.

My mom buckled down, excelled in school, and took on far more responsibility than she should have had to. She stayed out of trouble and never rebelled.

Well, almost never. As a teenager, late at night she would sometimes climb quietly out of her bedroom window on the second floor of the square yellow house on Boutelle Road, use the drain pipe to shinny down from the porch roof, and ride her bicycle up and down the streets of Bangor.

She didn’t join up with other rule-breakers, or drink, smoke, or shoplift. She just rode her bike, alone, savoring a small taste of freedom.

She came close to being found out only once, after she rode through a patch of fresh tar, and the housekeeper nearly caught her scrubbing it out of her clothes in the bathtub.

In 1937, at 17, she graduated as the valedictorian of her high school class and headed to the University of Maine to major in English. She expected to have to live at home and commute, but when she was awarded a scholarship that covered her tuition, her father told her she could live on campus instead.

“I felt like I had been set free,” she told me.

She graduated, went to Hartford, Connecticut to work for the Aetna Life Insurance Company, met my father, 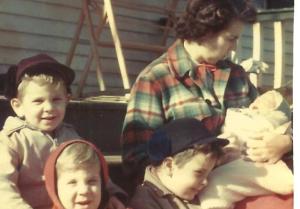 married, and had four kids in six years. She grew and canned vegetables, baked cakes, pies, and cookies, sewed clothes and curtains and quilts, and knit hundreds of pairs of mittens (literally, hundreds—maybe even thousands).

Sixteen years after they were married, when my mother was 38 years old, my father died suddenly of a heart attack. A week later, she packed the kids into the station wagon and drove them to Maine, to spend the summer at the family camp they had been building for the past three summers. 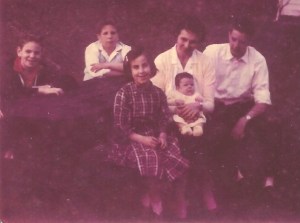 By the end of the summer, she realized that she was pregnant with her fifth child. Instead of wailing and gnashing her teeth, she decided there was nothing she wanted more than another baby, and she would treat my birth as some sort of miraculous gift.

Against incredibly daunting odds, she figured out how to support five kids as a single parent, kept us all fed and clothed and out of juvenile detention, and sent us all to college.

Even more remarkably, she turned us all into adults who are, I believe (and I think most people who know us would agree), conscientious, competent, kind, and funny—the qualities we were raised to value most highly, as she did.

Mom made sure we knew we were a real family, at a time when a family without a father risked being seen as 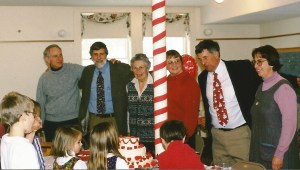 something less than whole.

Happy 100th birthday in heaven, Mom. Every single day, I think of you, with love.