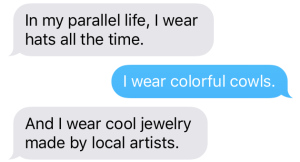 “I really want to get to the ‘leggings every day’ way of life. I just can’t find those flowing tops,” says Donna, my best friend of over 50 years.

She is the one person in the world who understands me best, and we are having a conversation, via texting, about the ongoing struggle over what to wear.

We’re not talking about how to select an outfit for any given day, but about how to build a wardrobe that reflects who we are, while still being presentable enough to prevent us from being picked up as vagrants when we leave the house.

We are 57 years old and fashion took a backseat to comfort a long time ago. Our mental list of clothing items that 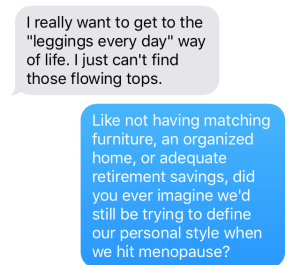 complete the sentence “Life is too short for…” has grown to include:

▪  Tight shoes, shoes with slippery soles, and any kind of heels. We are thankful that sneakers and sport sandals are considered appropriate footwear in so many situations these days, but if they weren’t, it’s entirely possible that we’d be wearing the same chunky orthopedic shoes we used to mock behind the backs of our elementary-school lunch ladies.

▪  Pants that are too high-waisted, too low-waisted, or have constricting waistbands. The midsection has always been an area of particular concern. In our younger days it was because we were constantly trying tricks to minimize it, some of which even involved Spandex; now it’s because if we leave the house in the morning in a pair of pants with a poorly-fitting waistband, we know that by noon we’re either going to be unbuttoning the fly or experiencing abdominal discomfort.

▪  Uncomfortable underwear, including but not limited to bad bras, bikini underpants (let’s not go any further than 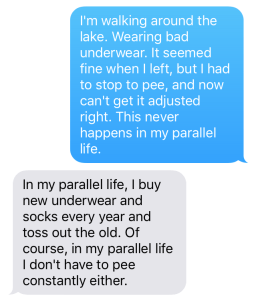 that in the underpants department; in my childhood, “strings” were what you tied your sweatshirt hood with, and “thongs” was a synonym for flip-flops, and I prefer not to think about any other use those words may have in today’s fashion world), underwear with elastic that is past its prime, and anything called a “foundation garment” that makes you feel as if some body part or other is encased in a garden hose.

▪  Any garment that itches, pinches, chafes, rubs, or otherwise doesn’t “feel right.” I used to wear turtlenecks all winter without a second thought, until several years ago (it may have coincided with the arrival of hot flashes), when they started making me feel like I was being strangled, so they went into the donation box. (I’m a big thrift store donor, as well as shopper. Sometimes I even donate something I’ve just bought that doesn’t turn out to be as wonderful as I’d hoped; Donna and I call this “catch and release thrifting.”)

When I’m at home, I confess, my usual uniform is flannel pajama pants (always with pockets) and soft, well-worn t-shirts (long-sleeved or short-, depending on the season). Donna favors leggings and something from her impressive collection of cozy fleece tops. These clothing choices are ultra-comfortable, and our cats seem to appreciate the soft laps they provide.

But, as much as we’d both like to, we can’t stay home with the cats all the time, and neither one of us has ever really been able put together a “going-out look” that is both comfortable and uniquely ours.

For my part, I’ve settled on a default wardrobe that includes three pairs of jeans (tan and black for my three-day-a-week, anything-but-blue-jeans job, blue for everything else), an assortment of about a dozen thrift store tops, sneaker-type walking shoes, and that’s about it. In the summer I’ll switch to three pairs of capris, a dozen or so summer tops, and sturdy sandals.

I’ve never given much thought to fashion (my daughters are nodding vigorously as they read this), but now that I’ve begun—finally, in late middle-age—to develop a sense of Who I Am, it would be kind of nice to put together a look that reflects that.

I’m very drawn, for instance, to highly textured hand-knit scarves and cowls in either jewel tones or earth tones…at least when I see them on other people. I know how to knit; I could just sit down and make myself a few. But I’ve never really been able to pull off any sort of scarf-like thing—they make me look like I’m either being treated for whiplash or have become hopelessly entangled in something. 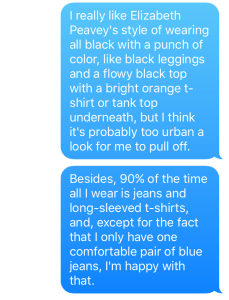 I have a friend, a writer and dramatist, whose look—usually all black, with just a hint of bright color in a layered t-shirt or tank top—I greatly admire. And it’s a fantastic look on red-winged blackbirds, one of my favorite birds, too. But when I tried it out, I only resembled a rather plump and ungainly crow.

I agree with Donna that leggings and “those flowing tops” seem like a wonderful idea (especially, for some reason, if the tops are in water color-inspired shades of blue, green, and teal), but I absolutely need big enough pockets to carry a tube of lip balm, my Swiss Army knife, an 8-foot tape measure, and my phone. I just do. Besides, I’m sure I’d be constantly slamming my sleeves and hems in the car door, or catching them on something.

So I guess for now I’m sticking with jeans and thrift store tops when I have to leave the house, and flannel pants (with pockets) and t-shirts when I don’t.

At least the cats will be happy. 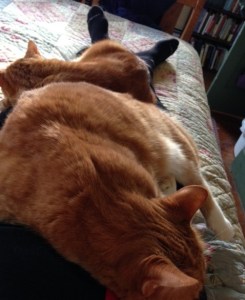