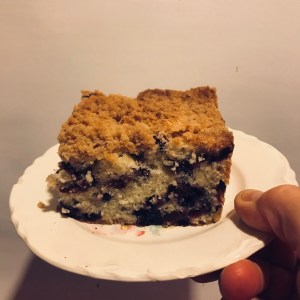 Start with the berries. Go out the front door. (At camp, that’s the door on the lake side; the door toward the road is the back door.) Go down to the edge of the lake and pick two cups of berries from the clump of wild high-bush blueberries that has (without fuss or fertilizer, attention or interference) been producing berries for pancakes, muffins, and cakes for more than half a century.

If you tie a cut-down plastic milk jug around your waist with a piece of clothesline rope, you’ll be able to use both hands to pick; this is helpful. 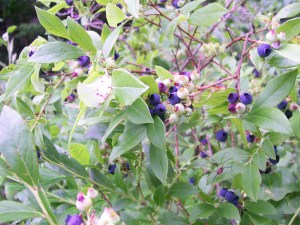 Go barefoot, and wear shorts, because to pick the ones on the lake side of the bush you have to stand in the water.  (Gramma Wight did not wear shorts. She wore skirts. I do not wear skirts at camp—or anywhere else, for that matter, if I can help it.)

The best time to go is early in the morning, because if you get there before the sun burns off the dew, there will be fairy dresses to admire, stretched between the branches of the bushes and spread out on the little patch of grass behind them.

Use Marjorie Standish’s Melt-In-Your-Mouth Blueberry Cake recipe, from her first cookbook, Cooking Down East. Marjorie says this is “undoubtedly the most popular recipe ever used in my column.” There is good reason for that.

Marjorie was a great cook, a true professional. She wrote a recipe column for the Maine Sunday Telegram for many years, and her cookbooks are classics. People call her “Maine’s Julia Child.” There’s no real reason to make any changes to her recipe at all, but I modify it with the addition of a crumb topping, because who doesn’t like a nice crumb topping?

You’ll need: two eggs, separated; a half-cup of shortening (next time I might experiment with using butter instead, but today I went with Marjorie’s recommendation and used Crisco); a cup of sugar; a teaspoon of real vanilla; a cup and a half of flour; a teaspoon of baking powder (I like Rumford brand because it’s aluminum-free and doesn’t give your baked goods a weird, metallic aftertaste); a quarter of a teaspoon of salt; a third of a cup of milk; and two cups of blueberries. (Marjorie’s recipe actually only calls for a cup and a half, but I like to use two cups if I have them. The cake will come out just fine, not too heavy or soggy, and it will have a lovely amount of blueberry taste in every bite.)

Separate the eggs and beat the whites until stiff. It’s best to use Gramma Wight’s old Pyrex mixing bowl for this; the red one should be the right size.

If you’re a purist, you can use the ancient hand egg-beater that is hanging on the pegboard to the left of the sink. Be sure to clean the cobwebs off it first; it probably hasn’t been used in a while. But it’s okay to use the electric mixer if you’re not feeling energetic. It’s a lot of work to beat egg whites stiff with a rotary egg-beater.

Add some of the sugar from the recipe to the beaten egg whites to keep them stiff, about a quarter of a cup.

Cream the shortening in a bigger bowl; the yellow Pyrex one is perfect. Before you put the shortening in it, turn it over. That “R. Wight” on the bottom, in faded Magic Marker, was put there several decades ago, so that the big yellow bowl would always be sure to come home from potlucks and picnics, after the cole slaw or potato salad or brownie pudding was gone.

Add the sugar, vanilla, and egg yolks and beat until nice and fluffy. It’s best if you’re able to use free-range local eggs, because they have the loveliest dark yellow yolks. My farmer friend tells me it has to do with the higher protein content of their diet, from eating bugs and grubs along with the usual grain. Whatever the reason, using local eggs will give your blueberry cake a nice, rich color.

Sift together your dry ingredients, but first, measure out your blueberries in a two-cup glass measuring cup—the chipped spout won’t matter—and mix just a little of the flour from the recipe with the berries so they won’t settle to the bottom of your cake; a couple of teaspoons should be enough.

If you still have the green Pyrex bowl that originally came with the set, it’s about the right size to sift the dry ingredients into, but if it has disappeared or gotten broken over the years, the stainless steel bowl that fits into the copper-bottomed Revereware saucepan (for use as a double-boiler) will work just fine.

Add your dry ingredients alternately with the milk, mixing with the old wooden spoon—just dig around, and you’ll find it in the drawer with the sharp knives (don’t worry; none of them are actually sharp enough to cut you), the broken vegetable peeler, and that heavy little glass thing nobody wants to throw out because one day someone might figure out what it is.

Gently fold in the beaten egg whites and then, even more gently, the blueberries. You don’t want to crush the berries—Marjorie used a rubber scraper for this step, but you may find that the rubber scraper from the knife drawer has gotten all cracked and crumbly over the winter. If so, don’t worry; just use the wooden spoon. But be gentle!

Spread the batter in a greased 8” x 8” pan. Marjorie says to sprinkle the top lightly with granulated sugar, but I do love a nice crumb topping. So mix half a stick of softened butter with a quarter cup of brown sugar, a half cup of flour, and a half teaspoon of cinnamon. Use a pastry blender—that ancient one with the crazily bent wires that was brought to camp fifty years ago because it “wasn’t good enough for home” will work just fine.

Sprinkle the topping onto the batter and bake it at 350 degrees for 50 minutes, or until it springs back when you press the center. 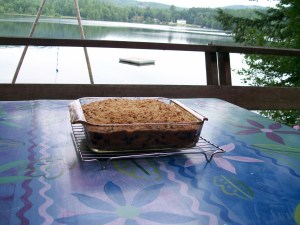 Put it on a wire rack on the table to cool while you go to a meeting, or out for a walk, or to the dump and the post office. If you’re lucky, there will be a piece left for you when you get back.