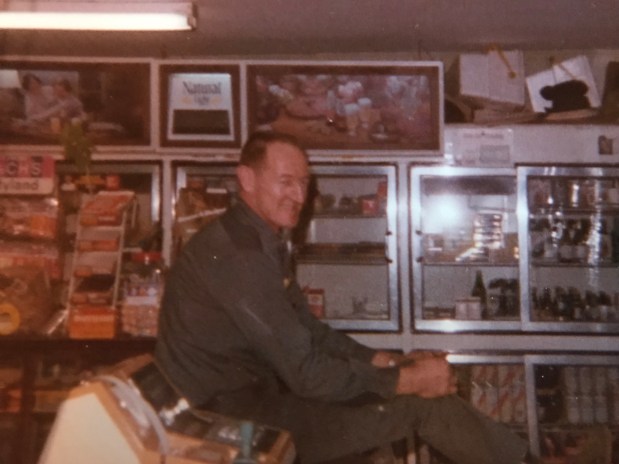 Last week’s story by Sam Wheeler in the Bethel Citizen, “Looking back at Bob’s,” brought on a wave of nostalgia, as I recalled my own eleven-plus years behind the counter at Bob’s Corner Store in Locke’s Mills.

I set out to write about those years, but quickly realized that my connection to Bob’s extends back much further than May of 1978, when I was 19 years old and had just landed my dream job—running the cash register, stocking the shelves and beer coolers, and pumping gas for Bob Coolidge.

So I’ll save my reminiscences about working there (and I have many!) for my next post, and, for now, write about my earlier memories of the store and its longtime proprietor. 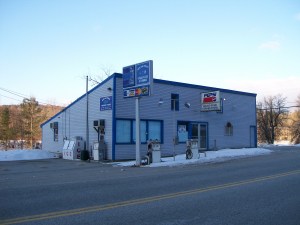 This photo was taken in 2011, when Bob was no longer the owner of the store, but except for the paint colors (it was always white, with green trim, when it was Bob’s), it didn’t look much different.

Like many “summer people” on North, South, and Round Ponds in Woodstock and Greenwood (I didn’t yet know that we were sometimes referred to as “summer complaint”), I traveled to the store by boat nearly every day in July and August from the time I was old enough to walk, talk, and demand penny candy.

My sister, Leslie, and I would take the family motorboat, a 1958 13-foot aluminum Duratech Runabout (my brothers will be sure to correct me if I’m wrong about those details), from our camp on the east shore of North Pond to the village of Locke’s Mills to pick up bread, milk, and the daily newspaper at Bob’s Corner Store (or, as it was known until the early 1970s, under the ownership of Lee Mills, Lee’s Variety).

My sister was nearly ten years older than I, and was therefore in charge of our mom’s list and, of course, the money.

She also always drove the boat. It was powered during those years by a cranky 18-horsepower maroon-and-white Johnson outboard, which was really far too much motor for it. We always carried a splintery old canoe paddle with us, and when the motor broke down, as it often did, we had to take turns paddling back to camp.

Quite often, there were visitors at camp—cousins, friends, or, later, nieces and nephews—and there would be five or six kids in the boat, all of us clad in bulky orange kapok life jackets. The weight of extra passengers came in handy when the water level of the lake was high, allowing us to sit low enough in the water to get through Johnny’s Bridge without scraping the steering wheel on the rough concrete overhead.

We still had to duck our heads to fit under the bridge, of course, or even lie down in the bottom of the boat, where spilled gas and oil mingled with remnants of the bacon rind and freshwater mussels we used for bait when we fished for white perch and sunfish.

Then it was on through “the channel,” where we tried to avoid letting the propeller hit any of the dozens of underwater stumps (we always carried extra shear pins just in case), past the picnic area, through the taller bridge under Route 26, and on to the store.

Damp and smelly, we jumped out onto the dock and clambered up the steep slope to the parking lot, dancing across the hot pavement in our bare feet. (There was never, that I can recall, a “No Bare Feet” sign on the door of Bob’s Corner Store.)

After picking up the items on our mom’s list, my sister doled out the change into our waiting palms. This was the moment we had been waiting for, and we swarmed the old wood-and-glass candy counter, filling tiny brown paper bags with penny candy for the trip home.

When Lee owned the store and presided over the cash register, he would dump each bag out and push our licorice sticks, Swedish fish, Mint Juleps, Tootsie Rolls, and Atomic Fireballs around on the wooden countertop with a thick, grubby finger as he carefully counted each piece. But after Bob took over, he just asked us how much we had in our bags and took our word for it. None of us would 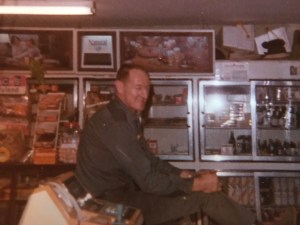 ever have dreamed of cheating him out of so much as a penny.

One evening at camp when I was five or six years old, for reasons I can’t remember, my sister took a red felt-tipped pen to my face, adding a sprinkling of bright-red freckles to my cheeks and nose, and I refused to wash them off. When Bob spotted them on our trip to the store the next morning, he began calling me “Chickenpox,” and he never really stopped.

Although I already knew that Maine was the only place for me, and that one day I’d come home and never leave, at the time, I was just a “summer person.” I always wondered if Bob would forget me during the long ten months of the year when I was exiled in Connecticut, but on my first trip to the store each summer, he’d call out, “Hi there, Chickenpox!” and I’d know I was back where I belonged.

Eventually, when I turned twelve, and the family rules permitted me to operate the boat by myself, my mother bought a new six-horsepower outboard motor that was slower, safer, and less prone to breakdowns. 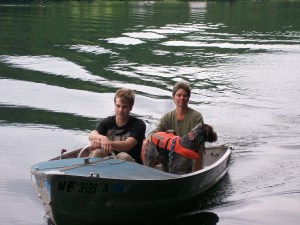 By then, Leslie was out of college, grown up, and married, and it became my job to lead the daily expeditions to Bob’s. I became the keeper of the money and my mother’s list. After I’d paid for the groceries and the newspaper, I divided up the change and we’d each fill a bag with penny candy. Then I’d shepherd the younger kids back down to the boat, and make sure they were securely buckled into their life jackets before we pushed off from the dock.

We’d try to ration our candy to make it last until we could make the trip again the following day, but somehow most of it seemed to disappear in the boat on the way back to camp. Someone usually remembered to save a stick of black licorice and a fireball for my mom, although I have a feeling that an hour of peace and quiet back at camp was all the reward she really needed.