Nearly four years ago, when I started writing the Locke’s Mills column for the Bethel Citizen, I was excited to have a weekly platform from which I could not only help my neighbors to keep abreast of happenings in our small town, but also reminisce, ramble, and report on just about any topic that interested me.

As I wrote back then in a blog post about taking over the column, “For writers, the weekly column is often considered to be a sort of holy grail—the most sought-after outlet for their writing. After all, as Peter Cole wrote for The Guardian, columns are ‘defined by ownership; the column “belongs” to its author who has that ultimate journalistic luxury, a slot, guaranteed space over which he or she presides and has, in some cases, near total control over content.’”

In the tradition of many of the Citizen’s local correspondents over the years, I have filled my column with a lot of personal musings. In particular, since I became an enthusiastic day hiker a few years ago, I have written about my hiking adventures, whether solo or in the company of other humans and/or Eli the Wonder Pup.

I have also written about local history, the weather, seasonal changes in the day’s length, and a host of other topics.

With the newspaper under new editorship, changes are inevitable, and one of those changes is a reduction in the space to be devoted to the so-called “town columns.” Local correspondents have been asked to adhere to a “just the facts, ma’am” format, to concentrate on actual local news (imagine!) and to keep our columns to 300 words or less. (That’s about the length of this introduction, so far.)

From reading today’s Bethel Citizen, I’ve learned that at least one local correspondent is giving up her column, and I won’t be surprised if others join her. In fact, I considered it, too.

But I’ve decided to continue writing a (much briefer) column for the paper, because I want to make sure that when there are events in Locke’s Mills, there is a space to promote them, and because I want the tradition of local columns to continue in the Citizen, even if they are no longer the homey, chatty forums many readers have enjoyed for decades.

Since I still expect to have far more to say than I can fit into 300 words, I’ll use this blog to supplement my newspaper column, and try to post here as regularly as I can.

So, welcome to my loyal Bethel Citizen readers! Here’s this week’s Locke’s Mills newspaper column, my last without space and content restrictions:

I hope everyone had a good Christmas! Since I’m writing this on the Sunday before, I can’t tell you about the actual day, but the days leading up to it have been filled with family, food, and fun, so I’m expecting more of the same for the holiday itself.

The biggest challenge of the season has been keeping Eli the Wonder Pup away from the tree, the bottom half of which has gradually become bare as we’ve moved one ornament after another up higher, out of his reach. 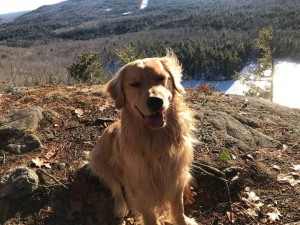 Eli was particularly naughty on Friday, when he missed his daily hike due to the pouring rain that lasted all day. I made up for it on Saturday by taking him for a long walk in the continuing drizzle while uncle and aunties Will, Annie, and Cait were off to Boston for the day to visit niece Lila and her parents.

Sunday was a much nicer day, and Will, Tony, Eli, and I hiked to and around Overset Pond, which wore all of us out in good shape. 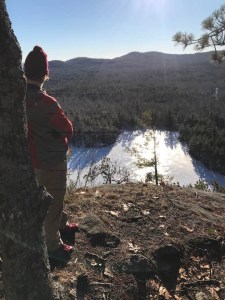 I’m sorry to say that this will be my last lengthy, chatty Locke’s Mills column, at least for the time being. All of the local columnists received word last week that, due to financial and space constraints, beginning with next week’s paper, our columns should be no longer than 300 words and should “talk about what is going on in your towns (as opposed to personal things).”

For comparison, my column has usually run at least twice that length, and occasionally, when I’m especially verbose (like this week), up to 1,000 words, so this will mean quite a change for me.

When I first took over this column, nearly four years ago, I planned from the outset to make it a mix of announcements of upcoming events, whatever local news I could gather at places like the post office and The Local Hub, and informal chatter about whatever struck my fancy.

After all, I was following in a long tradition of Bethel Citizen correspondents who, each week, shared their adventures, big and small, as well as those of their families, friends, and even their pets.

What longtime reader of this paper can forget Viva (Yates) Whitman’s reports, back in the 1980s and early ‘90s, on the doings of the Yates siblings, among them Russell (Joe), Linona (Peggy), and Laura? They were all senior citizens at the time, and their activities consisted mainly of visiting back and forth and driving each other to doctor’s appointments, although I do remember an episode involving brother Russell’s search for a particular brand of footwear that seemed to stretch over several weeks.

Lorraine (Mills) Larson wrote the Locke’s Mills column for many years, and during that time we probably knew as much about the personalities and misadventures of her cats and dogs as we did about those of our own pets.

Past correspondents from far-flung places like Magalloway and Wilson’s Mills shared their news, and although I didn’t know anyone in those places, I read every word.

And, of course, for several decades there were Colista Morgan’s columns, written from the shores of her beloved pond in Greenwood City, detailing that week’s outdoor adventures, by foot or in her trusty rowboat.

Although my parents were both Mainers (my father grew up in Bethel and graduated from Gould Academy in 1930), they met and raised their family in Connecticut. We spent every summer at our camp on North Pond, but I had the misfortune, the rest of the year, of growing up in exile, homesick for what I knew was my true “spiritual home.”

It was Mrs. Morgan’s column, more than any other, that helped me to stay connected to the woods and ponds and mountains during those long ten-month stays in wretched suburbia, and when I was about 12 years old, I wrote to her to tell her how much her weekly essays meant to me. (It pains me to admit it, but I believe that I also included a few of my angst-filled adolescent poems in that first letter.) 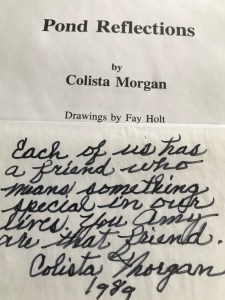 She wrote back, and thus began a correspondence that would last for 30 years.

Fifty-two of Mrs. Morgan’s essays were later published by the Bethel Citizen in a wonderful collection called Pond END_OF_DOCUMENT_TOKEN_TO_BE_REPLACED