I’ve actually been picking a few almost every day, at least on the mornings when I walk around the lake. There are at least three different places where I can count on finding a handful, and sometimes (like when I’ve left camp without remembering to eat breakfast first) they’re the only thing that sustains me on the almost-five-mile walk.

Blackberry bushes often grow up on land that has recently been cut over, allowing the sun in. Actually, the first thing to spring up among the leftover slash from a timber harvest is usually wild raspberries. My mother was a genius at finding wild raspberry patches, and the fastest and most tireless picker. For several years there was a patch along the camp road that we considered our own, where we picked gallons of raspberries, which my mother turned into jam and pies.

After a few years, the raspberries gave way to blackberry bushes, which then gave way to poplars and striped maples and other fast-growing trees, and eventually the forest grew back. No raspberries have grown there for more than 40 years, but when I pass that spot on the road, I still think of it as the raspberry patch.

Then, as now, there were always places along the road to pick a few blackberries. On August 24, 1972, I walked about a quarter of a mile to a prolific blackberry patch across the road from the lots where two camps had been built a few years earlier. I put on long pants and a long-sleeved shirt, tied a cut-down gallon plastic milk jug around my waist, and set off.

I was thirteen. I was an odd and solitary adolescent, and going off alone to gather blackberries was just one of many odd and solitary practices I engaged in that summer. I had just survived two years of junior high hell and in less than two weeks I was headed to high school, which promised to be every bit as hellish.

I had a lot to think about, and during my last days of summer vacation I spent even more time than usual by myself. I took long, broody walks and contemplated the unfairness of my life, puttered around in various boats while trying to figure out how to get my mother to leave me in Maine when she went home to Connecticut on Labor Day weekend, and climbed up to Buck’s Ledge to lie on the moss and write bad, angsty poetry.

Anyway, on that day, 44 years ago, I came in through the back door of the camp with my bucket of blackberries and my slumped shoulders and my best adolescent sulk.

My mother was just hanging up the phone (it’s not important to the story, but I can’t help but note that it was THIS phone, one of the last hand-crank phones in the U.S.

), and she turned to me and said, “You have a niece!” and wiped her eyes with the back of her hand and positively beamed.

I’d been an aunt since the age of eight. I already had two nephews, and although I was pretty thrilled with them, I’d been secretly hoping for a niece, just as my mother had been secretly hoping for a granddaughter. I know she was imagining the tiny sweaters she would knit, and I think she started cutting fabric that same day to make the first of that generation’s dozens of hand-smocked dresses. 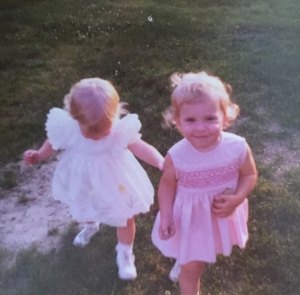 I was imagining all the things a niece and I would do together. I was imagining perfecting my junior-high home ec skills and sewing her a teddy bear, with a pinafore on which I would embroider her name—Katy with a “y.” I was imagining teaching her to bake cookies. And pick blackberries.

I was imagining a little person who would see me not as the glum and lumpy teenager I was, but as something I had never been in my life—cool. Never mind that I had never had even a prayer of being one of the Cool Kids—I would be the Cool Aunt, and that would be a million times better.

First Niece was born in Ohio, which was way too far away. But only a couple of months later, she, along with her parents, came to stay with us in Connecticut for several weeks while they found a house to buy in West Hartford, near my brother’s new job.

Throughout my high school years (which were in some ways exactly as awful as I’d feared) I spent a great deal of
time with First Niece—at our house, at their house, and, in the summers, at camp in Maine. I sewed her a teddy bear. We baked cookies. We picked blackberries.

In a million ways, she helped to make my adolescence bearable. And she thought I was cool.

She actually thought I was cool. 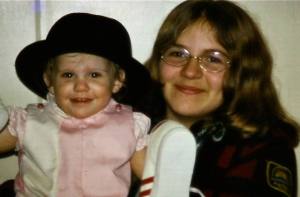 Well, we were both pretty cool.

She’s all grown up now. She’s smart, and she loves knitting and books,
and she’s studying to be a librarian. My mom would be so, so, so proud of her.

She’s funny and compassionate and outspoken and a little quirky. I’m so, so, so proud of her.

And I like to think that it’s in some small way due to my early influence that she turned out to be so incredibly cool. 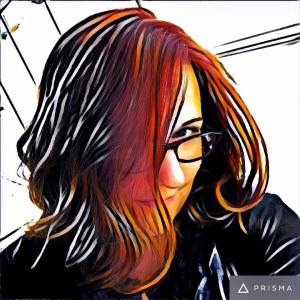 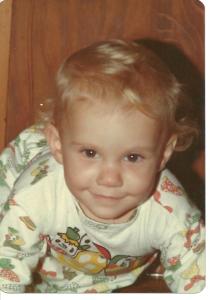