Welcome to readers of my Locke’s Mills column in the Bethel Citizen. As promised, here’s an expanded version of this week’s column. 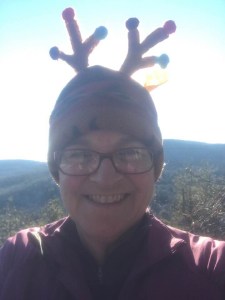 Happy New Year! It’s hard to believe it’s already 2019. It really doesn’t seem very long ago that it was the last day of the 20th century, and we were all worrying about the effects of “Y2K” on our computer systems.

I spent some time going through my “Hikes 2018” photo album on Facebook, and it looks like I managed to “take a hike” at least 105 times last year. There may have been a few short hikes that didn’t make it into the album, but I usually try to take at least one photo on every hike so I’ll have a record of where I went and when.

I was surprised to find that the month with the most hikes—14—was the shortest month, February. I remember that after some early winter snowstorms, there was a brief January thaw followed by a long stretch of cold temperatures and something of a snow drought, which made it easy to go just about anywhere with Microspikes. By March, it was back to snowshoes, and there was snow on some of the local trails through mid-April. According to a video I saved on my phone, Eli even found a patch of snow to slide on at Mt. Abram on May 8.

My longest hikes of 2018 were only about seven or eight miles—Sunday River Whitecap, Caribou, and the full Sanborn River/Overset Pond trail network. Most of my hikes ranged between two and five miles, and I stuck mostly to very local, familiar trails, especially when I was hiking solo. I hiked in Maggie’s Nature Park at least 28 times, and to Buck’s and/or Lapham Ledges at least 25 times.

Tony hiked with me 19 times, Will came along 35 times, and Eli the Wonder Pup accompanied me on at least 81 hikes in 2018. I also hiked with other family or friends ten times. More than half of my hikes, 56, were either solo, or done with only canine companionship. I enjoy hiking with someone and hiking alone (or with just Eli) about equally, so it was a good mix of both throughout the year.

For 2019, I’d like to challenge myself to hike a few longer distances. And maybe I’ll challenge Tony to come along with me a little more often. 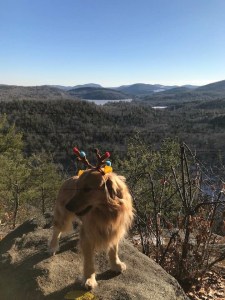 I have yet to hike in 2019, but I did do three nice hikes in the last week of 2018. Will, Eli, and I hiked up Peaked Mountain in Greenwood’s own Maggie’s Nature Park on Christmas afternoon, and again on December 30. On Saturday, December 29, I enjoyed a beautiful hike up Peabody Mountain in Albany with my niece Sara and my 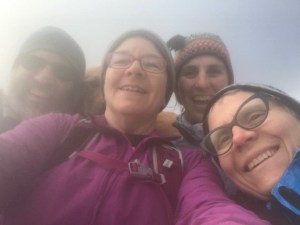 nephew Keith and his wife, Cindi. The temperature was about 40 degrees when we started out, but by the time we reached the summit, it had dropped by nearly ten degrees and the wind had come up. We had brought along a few extra articles of clothing, and even though we didn’t actually need them, it was a good reminder that it’s best to be prepared for quick changes in the weather when hiking in northern New England in the winter. 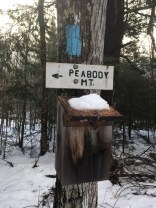 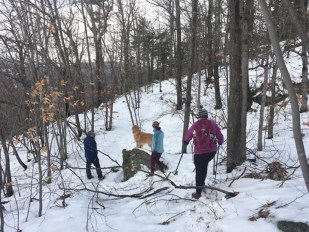 The Greenwood Farmers’ Market will be held on the next two Fridays, Jan. 4 and 11, then will switch to every other Friday for the winter. The next few market dates after the switch will be Jan. 25, Feb. 8 and 22, and March 8 and 22. Since I started my new part-time job at the Museums of the Bethel Historical Society this week, I will no longer be at the market “in person” on a regular basis, although I hope to be there occasionally. In the meantime, I’ll try to keep the Town Hall freezer stocked with frozen pies and cookies, which can be purchased from either Suzanne Dunham (Dunham Farm/Velvet Hollow Sugarworks) or Michelle Shutty (Greenwood Bean Coffee). 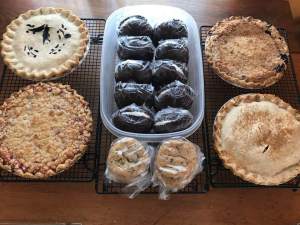 It looks like last Friday’s storm, which started as snow and ended as rain and freezing rain, put an end to what was, from all reports, a fantastic early-winter ice-skating season on the local ponds. Now it’s on to ice-fishing, and there are already a couple of shacks out on North Pond. Someone has also been tending to a lot of traps on the small pond between Route 26 and the railroad tracks, which, although it looks like a separate pond, is considered a part of Round Pond, one of the three connected Alder River Ponds. I wonder what kind of fish they catch there, and whether the fish in that part of the pond spend their whole lives there, or have access to the other parts of the ponds via culverts or streams. Who knows the answer to that? Anyone?

Please send me your local news via email at amy.w.chapman@gmail.com, by phone at 207-890-4812, or find me on Facebook or in person around town. Thanks for reading!