If you don’t recognize the song lyric in the title of this post, chances are you’re not as old as me. (It’s by Harry Nilsson, and it’s from the theme song of “The Courtship of Eddie’s Father,” which aired from 1969-1972.)

My best friend, Donna, turned 60 a couple of months ago, and I’m not far behind her. Coming to the end of one decade and embarking on another always leads me to reminisce and reflect. Lately I’ve been thinking a lot about our long friendship, and how it has endured against some pretty steep odds.

We’ve been best friends for over 53 years—nearly 90 percent of our lives. In fact, I can barely remember anything about my life before we met, on the second day of second grade. (I told our “origin story” in a blog post a few years ago, when we celebrated half a century of friendship; you can read it here.) 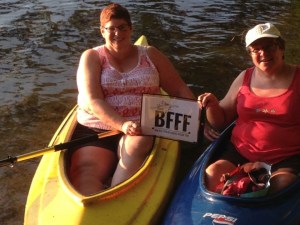 Although we grew up on the same street in Milford, Connecticut in the 1960s, in many ways, our family backgrounds were very different.

Donna and her younger brother were raised by two parents who had lived in Milford all their lives, and who still live in the suburban ranch on Marshall Street they moved into in 1965. I was raised by a widowed mother whose family had lived in Maine for generations and who regarded her time in Connecticut as a period of exile to be gotten through before she could retire back to her home state.

Donna’s mom was 25 when she was born, and she stayed at home to raise her two kids. My mom was 39 when she had me and had already raised my four much-older siblings; of necessity, she went to work outside the home by the time I was three or four.

Donna’s father was Italian and her mother was Irish, and they were Roman Catholics; she went to mysterious church-related things called mass, confession, and catechism. I was especially puzzled—and made envious—by the concept that if her family had something else they wanted to do on Sunday morning—even just sleep late—they could get mass out of the way on Saturday afternoon.

Although we lacked the wealth and social connections implied by the acronym, my family was pretty WASP-ish, and we went to the big white Congregational church downtown, every Sunday morning without fail.

Donna’s mom worried a lot about whether we were safe when we were out of her sight; my mom figured that her other kids had survived childhood and, more than likely, I would, too.

After high school, Donna would become the first in her family to attend college, a prospect so terrifying to her mother that she bribed her with a car to stay at home and attend a nearby Catholic university for the first two years. 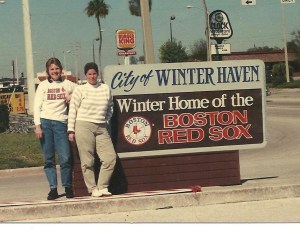 Both of my parents, and even at least one of my grandparents, were college graduates; I was raised without any question of whether or not I would be, too—and my mother gave me a suitcase for my high school graduation, just three months after I turned 17, to reinforce the idea that it was high time for me to leave the nest.

Not only were our backgrounds different, but the paths we chose through life—or those that chose us—seem, on the surface, quite dissimilar.

Donna finished college in the customary four years; it took me 31. (I got distracted by other things along the way.)

I’ve been married twice. Donna has never been married, although she has a long-time partner, Jerry, who has been in her life almost as many years as Tony has been in mine.

I’ve owned a home since I was 20 years old and have always dealt with yard work, peeling paint, leaky roofs, and remodeling projects. Donna has rented for 40 years (something that makes more and more sense to me the older I get).

Despite this, she has been the responsible one, always holding a full-time job with good benefits, while I’ve indulged my irresponsible inner free spirit with a series of dozens of jobs over the decades, many of them part-time, most without benefits.

I have a blended family that includes four kids (most with some degree of free-spiritedness themselves). She has one stepson (and he’s ultra-responsible, too).

Given our differing backgrounds and the different life decisions we’ve made, perhaps it’s a bit surprising that we forged such an early, enduring, and fulfilling friendship. However, the qualities that make us soulmates transcend the details of our family backgrounds, where we live, or how many kids we have.

We are both introverts who can happily spend all day alone, or with just each other, but are easily exhausted when we’re forced to go “among the people.”

We both love cats. She has two; I have three. She knows that two is a sensible number of cats. I confess that if it weren’t for Tony’s objections, I might well have six. Maybe more.

We love our homes. We love them so much that we grieve when we have to leave them for work. We text each other, “It would be a perfect day to stay home and do projects,” and “I’m feeling sad because when I leave the house today it will be ten hours before I can come home,” and “I wish I could just stay home with the cats today.”

We both love a good project, from the planning to the execution to the sense of satisfaction when we’re done.

And we both love camp. We never feel more like ourselves than when we’re there, whether we’re swimming, kayaking, relaxing on the deck, reading by 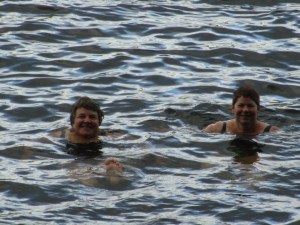 the woodstove, or doing a project.

We both love email and texting but hate talking on the phone. Although we probably logged several thousand hours talking to each other by phone in the first 30 years or so of our friendship, if either of us gets an actual phone call from the other nowadays, we can be pretty sure it’s either a major crisis or a pocket-dial.

But the most valuable aspect of our friendship, and the reason it has not only endured, but flourished, is the sense of comfort and security that comes from being truly seen, known, and understood by another person—and being loved anyway.

How many of our conversations include the words, “I wouldn’t tell this to anyone else, but…”?

To whom else could we reveal not only our soaring hopes and our greatest fears, but also our most embarrassing moments, our meanest thoughts, our most unflattering pettiness?

As two women who are nearly always viewed by others as unfailingly calm and polite, whose stock-in-trade is our willingness to be helpful and kind, we find great relief, now and then, in giving our better angels a rest.

My daughter uses the hashtag “#textsfromyourthirties” on Instagram to (over)share conversations with her sister and friends. (It’s pretty funny; you should check it out.) If Donna and I created “#textsfromyoursixties” it would be full of posts like this: 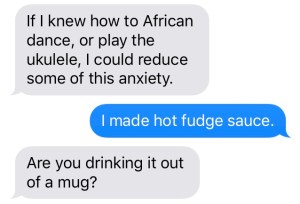 “Everyone thinks I’m so nice, but really I just want to hit them.”

“Why does everyone always want to talk to me?”

“If people knew how mean we are, they wouldn’t like us nearly as much. And that might be a relief.”

“I want to scream, ‘I just want to go home!’ but that would be inappropriate.”

Although he may not be famous for his pithy texts, Ralph Waldo Emerson is known for his nuggets of wisdom, and he hit the nail on the head when he said, “A friend is a person with whom I may be sincere. Before him, I may think aloud.”

Or text, with impunity. 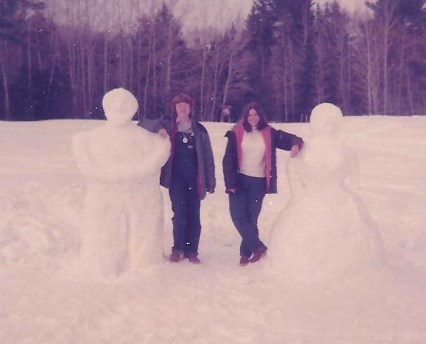 8 thoughts on “Let me tell you ’bout my best friend”