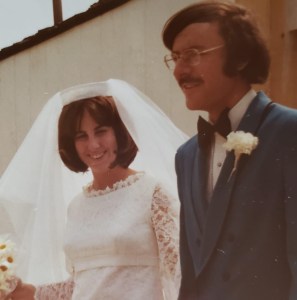 Today is my sister and brother-in-law’s 50th wedding anniversary!

Les and Bob are the kind of people I would describe, without hesitation, as “the salt of the earth”—a phrase that pops into my head when I think of people who are sincere, honest, hard-working, and kind.

They met at the University of Maine. It was the late 1960s, and the country was caught up in social and political movements—pro-civil rights, anti-war, pro-feminism, anti-establishment—but Les and Bob were not hippies or protesters or, as far as I know, even affected much by “The Sixties.”

They were both pretty busy pursuing practical degrees (him: electrical engineering; her: elementary education) and preparing for practical career paths.

I was about ten years old the first time Les brought Bob home to meet the family.

Like the rest of us siblings, Les was a wannabe Mainer, born and raised in exile in Connecticut, but identifying far more closely with our parents’ state of birth than our own.

Bob, on the other hand, was a Maine native, having grown up in Waterville, and this fact gave him automatic prestige in my eyes.

I don’t know how long they had been dating at the time, but they weren’t yet engaged. I also don’t know why I thought it would be a good idea to conduct a sort of hazing ritual, or why I thought an actual, real Maine native would be alarmed to find the taxidermied head of a black bear on the pillow of the bed he had been assigned in the bedroom my three brothers had shared when they all lived at home.

(Don’t ask me why we even had the taxidermied head of a black bear around the house. It seemed perfectly normal to me when I was growing up, and the only thing I remember being told about it was that it was all that was left of a bearskin rug that had been destroyed by moths. I had no idea of the original rug’s provenance and probably assumed most families had that sort of thing hanging around in their storage closets.)

Bob liked to ice skate, and he was a really good sport about taking his girlfriend’s little sister and a friend or two to a small skating pond in the nearby woods. I’m not sure why we thought it would be a good idea to steal and hide his boots once he had changed into his skates, but I remember that we did. I also remember that he was completely unperturbed about it. (We did eventually return them.)

Bob also didn’t bat an eye (or turn and run) when my mother declared that it would certainly be nice to have an electrician in the family (although she probably added that a plumber would have been even better) and started making a list of small electrical projects around the house and camp with which he could occupy his time whenever they came to visit.

I was twelve years old when Les and Bob got married in the chapel on the UMaine Orono campus on June 19, 1971, and I was a junior bridesmaid. What I remember most about the day was that it was very hot, and there was some sort of mix-up about the time with the organist, and she didn’t show up, so we all processed in silence. She was supposed to have played the song “If,” and I always think of that song when I remember their wedding day.

Despite the nearly ten-year difference in our ages, Les and I fought a lot when I was growing up. With the wise perspective of age, I can now state unequivocally that every single one of those fights (even the one on the train to Arizona in the summer of 1967 that caused her to dig her fingernails into my wrist so hard they left little red crescent marks that took weeks to fade) was my fault.

My sister is not, in any way, difficult or demanding, annoying or argumentative, and I doubt that she has ever, in her whole life, had so much as a mild spat, let alone an actual fight, with anyone else. I, on the other hand, am all of those things, so I know without a doubt that I was the instigator in all of our fights.

When she was in high school, I whined and annoyed her at every possible opportunity, went into her room without permission (and occasionally broke things, then denied it), and teased her unmercifully about a couple of geeky boys who had unrequited crushes on her. I’m pretty sure she was relieved to go off to college, knowing she’d probably never have to share a home with me again.

But Les and Bob had barely returned from their honeymoon to New Orleans and settled into Bob’s family camp on Parker Pond for the summer when my mother, who was taking graduate courses during the early part of that summer, drove me to Maine and deposited me in their care for, I think, three weeks.

My sister, who is pretty much a saint, never complained. In fact, the first day I was there, she suggested that the two of us make a serious effort at détente.

“How about if we try not to fight for the whole time you’re here, and then when Mom comes to get you, we can tell her we didn’t have one single fight?” she suggested.

I agreed, a bit doubtfully.

As it turned out, it was easy, and I remember those weeks as one of the best times of my childhood, filled with swimming, walking, talking, baking, and playing games together. Not only that, but, now, fifty years later, as far as I can recall, Les and I have never again had so much as a mild tiff between us.

Les and Bob spent the first decade of their marriage living fairly conventional lives, first in Massachusetts, then in Connecticut, where Bob worked for Stone & Webster and Les taught school. Then, forty years ago, they made the momentous decision to buy a cute little country store in a small town in Maine.

With their two sons in tow, they landed in Mt. Vernon, where they have made their living and their lives ever since.

Their friends and neighbors who know them don’t need to be reminded of all the ways in which Les and Bob have immersed themselves in their community, but, for anyone who doesn’t know, here are just a few of their contributions:

They ran Mt. Vernon Country Store and a second store, Flying Pond Variety, for nearly 30 years, always with an acute awareness of their central role in the community. It was never “If we don’t have it, you don’t need it”…it was always “Sure, we can get that for you!”

Les put her kindness, dedication, and patience to work as a reading specialist at Mt. Vernon Elementary School, while working a second (often full-time) job at the stores.

Bob serves as the town’s cemetery sexton, which has included taking classes to learn to clean and repair gravestones and painstakingly restoring hundreds of the town’s ancient stones. 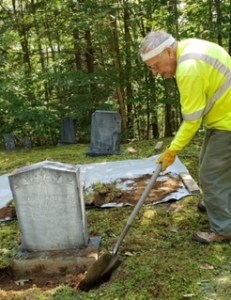 Les has been a mainstay of Mt. Vernon Rescue for decades; because she was almost always in town—teaching, tending the store, or working in her huge garden—she was virtually always on call, and still is.

There’s so much more that they’ve done—coaching, babysitting, serving as town treasurer, caring for elderly residents (and feeding their cats). Bob has received the Spirit of America Award for outstanding service to the town, and they were both honored by the Vernon Valley Masons as Citizens of the Year.

Several years ago, Bob—a confirmed “truck guy”—bought himself an early birthday present: a Mazda Miata. I think my practical sister was a bit aghast, but today, they left their responsibilities behind for a few hours, and headed off in the convertible for an anniversary day trip to the coast.

Nobody deserves it more.

Happy 50th, you guys…love you! 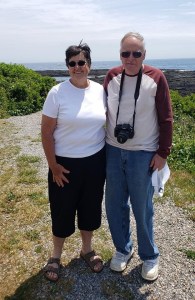 6 thoughts on ““The salt of the earth”: Happy 50th Anniversary!”