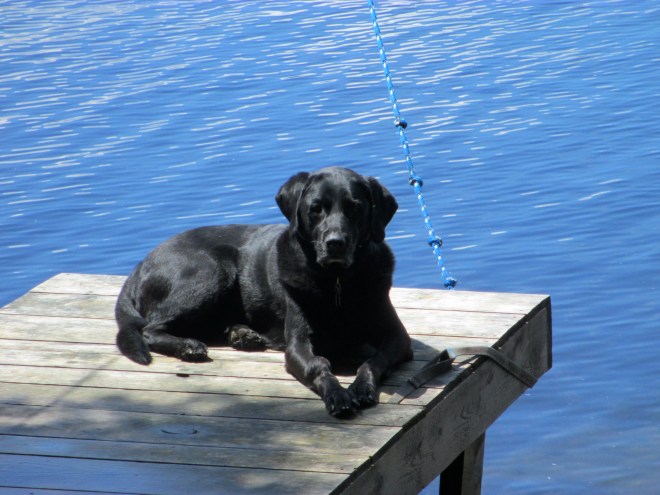 Today we said goodbye to the best dog in the world.

Our black Labrador retriever, Remy, was twelve. Some dogs have longer lives, but I’d like to think that few have better ones.

We brought him home on October 23, 2004, an eight-pound ball of energy who ate socks, chewed 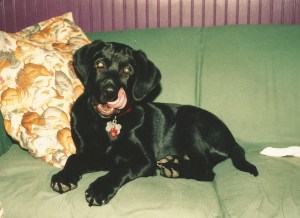 shoes, peed on the floor, and cried at night when he missed his mom. For the first few nights, I slept on the kitchen floor beside his crate to comfort him.

We quickly abandoned any idea of a no-dogs-on-the-furniture rule, and when he graduated from the crate, he slept on the couch. In his later years, we removed the back cushions from one couch to make more room for him to stretch out, covered it with blankets, and designated it “Remy’s couch.”

For years, if it wasn’t too cold or too hot, he went to work in the woods with Tony, where he kept watch for squirrels on the landing and raced beside the skidder on the twitch trails. Each day, as soon as he finished his breakfast, he waited patiently for the words, “You want to go to the woods?” then barreled out the door and into the cab of the truck.

He was almost always with us. We talked to him constantly, and he developed a fairly extensive understood vocabulary. Although he didn’t always choose to respond to commands, he knew quite a few. Besides the usual “sit,” “stay,” “come,” and “lie down,” he also learned “shake,” “speak,” “whisper,” and “go back.”

That last was how Tony taught him not to crowd the door when he wanted to go in or out, and it always made us laugh to see him scoot backwards on his butt. If you were armed with a biscuit and repeated it often enough, he’d “go back” clear across the room or yard.

He learned quickly that any question beginning with “You want…?” usually meant something he did, in fact, want, very much.

And his favorite, always: “You want to go to camp?”

Camp was to Remy just what it has always been to me: the center of the universe. He knew it as the place where the fun is more fun, the relaxation is more relaxing, the company is more wonderful, the freedom freer, and the food tastier (and much more likely to come his way, thanks to hot dogs that rolled from the grill, outdoor picnics on the deck, and inattentive visiting children).

At camp, he learned a specialized vocabulary that included “swim,” “stick,” “ball,” and “go get it,” 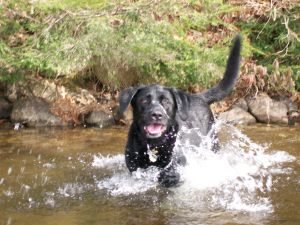 and when he was a young dog, he would launch himself from the dock, several feet above the water, to fetch whatever was thrown for him. Again. And again. And again.

And he learned the word “culvert”—how many other dogs know that one? He loved to go into the larger culverts on the camp road, splashing through them and emerging on the other side.

At camp, he learned “shut the door.” The closer on our screen door has a habit of catching about four inches shy of fully closed, especially after a cat has gone in or out through it. Remy learned to thrust it open with his head and shoulders whenever we asked him to “shut the door,” and let it slam shut. (Of course we viewed this trick as evidence of genius.)

He also picked up a lot of words we didn’t really teach him on purpose, like “biscuit” and “treat,” “supper” and “breakfast,” “ride” and “walk.”

In fact, he figured that any conversational reference to a walk was an invitation to go for a walk right now!, and we learned to spell it if we were talking about a walk we had taken in the past or might take in the future.

He always knew when we were talking about him, picking up on his name or “dog” or even “d-o-g” in conversation.

When a rogue pet rabbit from next door started coming into our yard and threatening our garden, we accidentally taught him the phrase “wascally wabbit” and for years any mention that there might be something “wascally” in the yard would send him into a frenzy of barking at the window.

But there was one phrase that seemed to puzzle him, from the first time he heard it until the last time we shouted it loudly enough for him to hear. 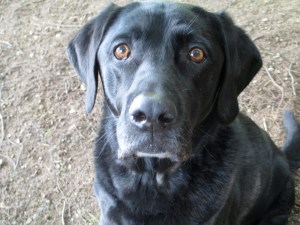 His expression was always one of bewilderment. Sometimes he looked around, as if to say, “I don’t know—who is a good boy? Is there someone else here?”

Maybe it was because, somewhere in his blessedly simple mind, he may have understood that he was not always what everyone would call a model canine citizen.

I’ve always said that I raised my dog pretty much the same way I raised my kids: Hands off and hope for the best.

As a result, Remy was an inveterate beggar, stationing himself under the table at every meal. 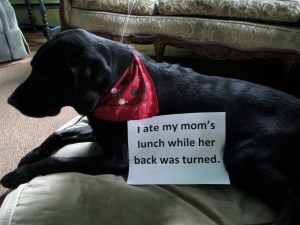 Obedience was never his strong suit. Although he certainly knew the meaning of “come,” he often ignored it.

He quickly outgrew chewing things up inside the house, but when he was outdoors, he considered anything small enough to lug off as fair game. We designated one outside wall of the camp as “Remy’s Wall of Shame,” covered with half-eaten sandals, toys, plastic flowerpots, and pool noodles. We frequently had to go looking for missing objects on the banking behind the camp, where he usually took them to chew them up.

A couple of years ago, when he’d gone months without stealing and destroying so much as a flip-flop, and we’d finally decided he’d outgrown that particular bad habit and had begun to relax our guard, in one week he destroyed two cell phones and a pair of glasses.

But in his twelve short years, Remy gave us so much unconditional love, so much laughter, so many memories, that a few pairs of flip-flops, a few plastic beach toys, the occasional $500 pair of glasses…they never really mattered. 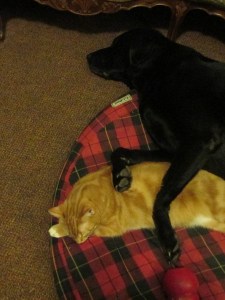 Last night I cooked him chicken for supper, and he got an extra Kong full of peanut butter for dessert. I changed the bandage over the inoperable, infected tumor on his leg.

Each of us—Tony, Will, and I, the same three people who picked him up and brought him home as a puppy and have loved him as if our hearts would burst ever since—said a long goodnight to him before he settled onto his couch.

This morning we were all with him at the vet’s, holding him, petting him, loving him. The ending was very gentle, a testament to modern veterinary medicine and the particular knowledge, skill, and compassion of our vet.

But I know that in time, when we share stories of Remy’s Best Days Ever (the Great Whoopie Pie Theft, the Time He Got Two Suppers, the Infamous Woodchuck Incident), I’ll laugh.

I’ll take comfort in knowing that he had a good life. He was warm and secure and well-fed.          I believe he knew how much he was loved.

And the answer to that question that always made him prick up his ears and raise his eyebrows and tip his head in befuddled concentration?

It was you, Remy. It was always you. 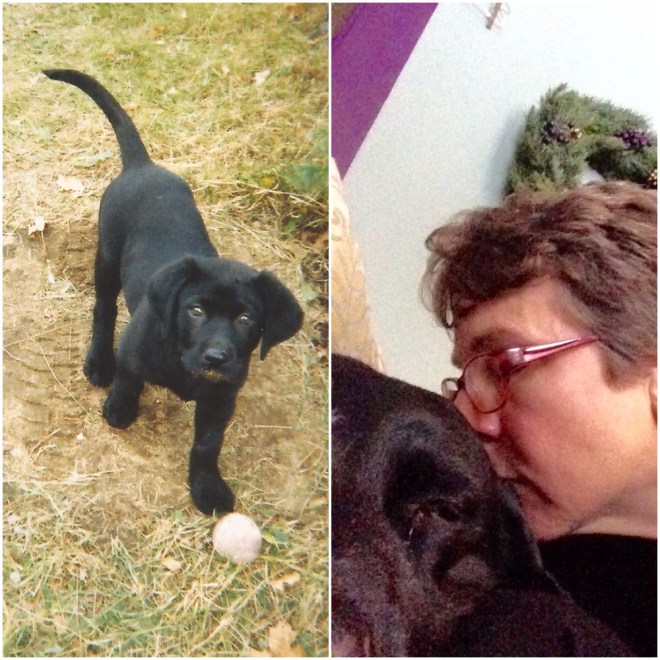