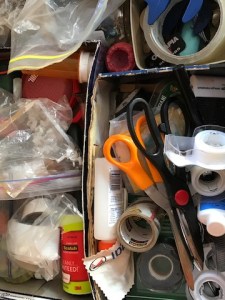 Okay, I confess. I’ve been completely captivated by the new Netflix original series, Tidying Up with Marie Kondo.

Ever since Netflix released eight episodes on January first, the show, and its diminutive dynamo of a host, who started a home organizing business in her native Japan more than a decade ago, have infiltrated the homes of untold numbers of American families pining for control of their clutter. 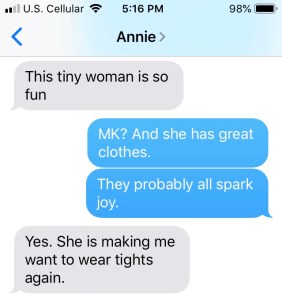 The release, of course, was perfectly timed to coincide with those New Year’s resolutions so many of us make about sorting, purging, and organizing our possessions.

This will be the year that we finally get the upper hand! No more closets bursting at the seams with clothes we haven’t worn in years; no more basements, garages, and attics filled with mystery boxes; no more digging through the junk drawer to find the flashlight, screwdriver, Scotch tape, or rubber band we know must be in there…somewhere.

In case you don’t already know this about me, I have never been a tidy person.

As a child, when told by my mother to clean up my messy room, I invariably shoved the offending clutter under the bed, where broken toys, dirty socks, and overdue library books went to die.

As an adult, I have often resorted to a similar strategy I call “hiding cleaning” when company is expected. This approach results in a passable level of tidiness in the public areas of my home, but leaves boxes, bags, and bins of random crap (RC for short) stashed in closets, bedrooms, and cupboards—sometimes for months, and occasionally for years.

Like most people I know, I have too much stuff. I hang onto far too many things that I think I might need someday, knowing full well that if the time should ever come when I do need that odd-sized bolt, slightly dented lampshade, or crumpled half-sheet of hot pink poster board, I won’t actually be able to locate it, and will end up going out and buying a new one anyway.

I bought Marie Kondo’s first book, The Life-Changing Magic of Tidying Up, a few years ago, and got as far as purging and organizing my clothing, which is Step One of the five-step process through which she leads the families in each episode of the show.

To aid in every decision about what to keep and what to purge, Marie instructs her clients to assess whether or not an item “sparks joy.” I have to admit that I have not yet reached a level in this process that allows me to clutch an item of clothing to my chest and immediately recognize that joyful spark, or lack thereof.

In fact, if I based all of my purging decisions on my ability to feel what Marie believes I should experience, my wardrobe would probably consist solely of flannel pants and soft, well-worn t-shirts, my preferred outfit on stay-at-home days (my favorite days).

But this is Maine, and it’s cold, and most days I have to go to work, so I held onto articles of clothing that are practical, warm, and presentable. (I told myself that it sparks joy in my heart to leave the house without freezing, or being mistaken for a vagrant.)

After she helps her clients figure out what to keep and what to get rid of, Marie teaches them her magical, vertical folding-and-storage method, which results in perfectly organized drawers in which you can see every item of clothing.

It actually works. Even better, three or four years after reading the book and organizing my clothes, they were, for the most part, still pretty tidy.

I kept only enough clothing to fill one small closet, one dresser, and one bin for out-of-season clothes, which, I realized after watching the families on Marie’s TV show pile all of their clothing on a bed in preparation for starting the sorting process, is pretty darn good. Some of them made me look like a minimalist.

It’s the other four steps in what Marie calls “the Kon-Mari method” that have presented much more of a challenge for me.

After clothing, she proceeds to lead her clients through “tidying” their books, then papers, then “komono” (miscellany), then mementos.

When it comes to books, I’m never going to ace the Kon-Mari test.

There have been about a zillion articles, posts, and memes about how “Marie Kondo wants you to get rid of all your books,” alluding to the fact that she has said that she herself keeps fewer than 30 books in her home. However, after watching the eight episodes of her show, I have yet to hear her tell anyone not to keep as many books as they feel comfortable owning.

I’ve decided that I, personally, feel comfortable owning just slightly fewer books than I have space for on my bookshelves. And I’m a big DIY-er, so as long as I have lumber, tools, and a bit of wall space, I’m never going to run out of bookshelves. Problem solved. 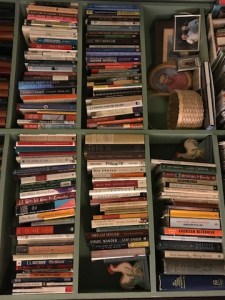 Papers: I’m not even going to go there, except to say that I’m working on it. I’ve realized that I’m never in this lifetime going to need to refer to an electric bill from 1998, and that, like those odd-sized bolts, dented lampshades, and crumpled half-sheets of hot pink poster board, I probably couldn’t find it if I wanted to anyway.

Which brings us to the final two categories, komono, which I believe is Japanese for “random crap” (it actually translates to “small things,” which is close enough) and mementos.

For me, there’s a lot of crossover between those two categories. Am I holding onto the Tupperware container with the cover that no longer seals because I believe I’ll use it one day, or because it was my mom’s? Do I keep my craft supplies because I believe that one day I’ll want to paint, stencil, quilt, or make soap, enough to actually do it, or because they remind me of a time in my life when those things seemed important? 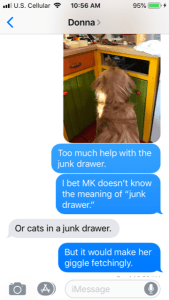 I started “Marie Kondo-ing” my kitchen a few weeks ago, and I’ve made some progress, especially when it comes to the junk drawer. (Everyone has one of those, right? It’s not just me?) I ended up needing three drawers to hold everything I kept from the one original junk drawer, but they’re all very nicely organized, and I have to admit that it’s really nice to be able to find things like scissors, tape, and pliers without plunging my hand into a mess of random objects, some of them dangerously sharp or inexplicably sticky.

Last weekend, I had a secret weapon in my quest to organize the tiny spare upstairs room that I hope will serve as a combination office, quiet reading space, guest room, and yoga studio: my best friend, Donna, came up to spend two days “Doing Projects” with me.

When it comes to home projects, Donna is everything I’m not: organized, naturally tidy, clear-sighted, and relentless.

By the end of the second day, I had banished two boxes of papers to recycling (“You’re never going to need those old electric bills!”), one large black plastic trash bag to the dump (“We’re using a black one so you can’t see what’s in it and change your mind!”), and three boxes to our favorite thrift store (“You can always go to a thrift store and buy another one for two bucks!”).

Donna put knobs on a dresser that has been missing them for ten years or more, organized my wrapping paper and supplies, and made me go through every single knitting needle I own and justify its existence.

She sorted office supplies into tiny boxes that would make Marie Kondo proud and created storage solutions for everything from yarn to blankets. She even convinced me to get rid of that crumpled half-sheet of hot pink poster board.

I only pulled it out of the recycling bin twice before I let it go. 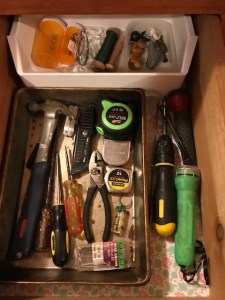 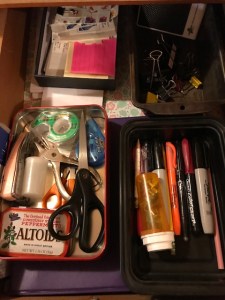 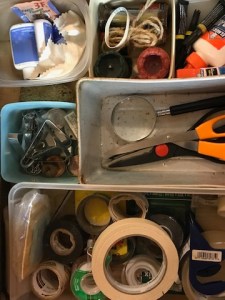 7 thoughts on “Tidying Up”