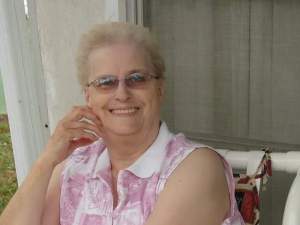 Last Sunday, I lost a dear friend. Sandra Martin Morgan made my world a brighter, better place with her sharp wit, her plainspoken wisdom, and her genuine kindness…and all without us ever having met in person.

Four years ago this month, I took over writing the Locke’s Mills column for our local weekly newspaper, the Bethel Citizen. In my first column, I included some bits of news about the municipal budget, wrote about attending Maine Maple Weekend at Brian and Suzanne Dunham’s farm, and added a link to this blog, with a note that “my latest entry includes some reflections on Locke’s Mills and why it means so much to me.”

Soon after that first column appeared, I received a comment on my blog from a new reader.

“Loved this!” Sandy wrote. “I mentally went on the journey with your descriptive walk through Locke’s Mills…I moved away 40 years ago and still miss my home town. I was born in Greenwood Center near the shores of Twitchell Pond and still write a blog about growing up there. Your blog was like a trip back home and oh, so well written. Thank you and I will be looking for more of your columns in the Citizen which I receive each week by mail!”

That’s how it began—as a mutual admiration society. It wasn’t exactly a friendship—not yet.

After all, Sandy and I had never met; she had moved away from her beloved hometown just about the same time I landed here, and we had just missed each other.

Before we could really be friends, we needed to learn more about each other. Facebook helped, and so did our respective blog posts, through which we learned about each other’s childhoods, families, and friends.

I learned that she was Brian Dunham’s mother. And Ethel Martin’s daughter. And Roland, Rex, and Curt Martin’s 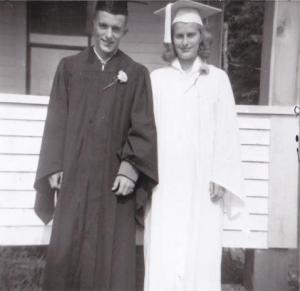 sister. And a cousin (first, second, third, or a few times removed) to just about everyone else I had come to know in my 40 years in and around Greenwood.

I came to Greenwood just a year or two too late to read her weekly columns in the Norway Advertiser-Democrat. For a decade, from the mid-1960s until the mid-1970s, she kept the world abreast of the happenings in her Rowe Hill neighborhood, and, in particular, at “Rocky Top,” the hillside farm where she raised her four children, chased after wayward livestock, and, whenever she could, found a few minutes’ peace to write. 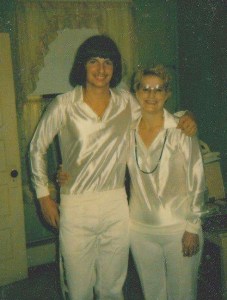 I arrived too late to hear her perform, often with other members of her musically talented family, at talent shows and other events at the Locke’s Mills Town Hall.

And I was too late to sit down with her in person, perhaps over a cup of tea and one of her Gram Martin’s toffee squares, and hear her stories of growing up in Greenwood Center, or of skiing over the pastures of Rowe Hill, or of bravely making a new life for herself in middle age.

But, through our lively correspondence, we soon learned how much we had in common, not only our love of Greenwood, but also our affinity for—among other things—cats, cookies, quirky characters, Kris Kristofferson, and the poetry of Robert Service.

Now and then, we exchanged small gifts through the mail. I sent her Christmas cookies and homemade granola, and she sent me a copy of her book, Just…Thinking, a collection of her newspaper columns, which her four kids had surprised her by publishing in 2010.

One day last summer I tore open a package from Sandy to find two volumes of Robert Service’s poetry, and a note in which she chided herself for not being able to locate the third volume, which contained some of our favorite poems.

A couple of months later another package arrived, and another note—unable to find her own copy to pass along to me, she had scoured eBay for a copy of The Spell of the Yukon for me, to complete the set. 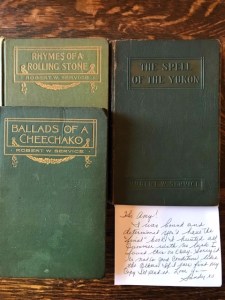 Some of our most satisfying online conversations were about our shared passion for writing, and what it has meant to us both.

“Writing has saved my life several times,” she once wrote to me. “If that is too dramatic, it has helped me climb out of dark holes a number of times. It has kept me on an even keel and keeps me from feeling sorry for myself.”

After her success as a local columnist for the Advertiser-Democrat, Sandy went on to cover human interest stories, take photos, and write a regular feature for the paper’s monthly supplement, “The Western Mainer,” in which she interviewed local entertainers.

She also covered local stories for the Lewiston Sun and wrote occasional features for the Maine Sunday Telegram and Portland Press Herald.

She freelanced for regional magazines, as well as for Grit, Farm Journal, and Yankee, and published several volumes of her poetry. 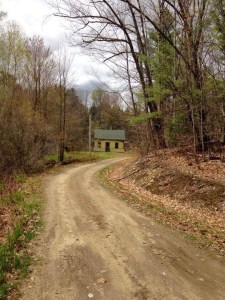 Although Sandy left Greenwood more than 40 years ago to live in Albany, New York, she never lost her love for the characters and special places of her hometown.

Just a year ago, with the help of her son Gary, she published her memoir, Salt Pork and Dandelion Greens: Growing Up Greenwood, a collection of essays she originally wrote for her blog. Poignant, evocative, and often hilarious, it immediately struck a chord with her many friends and relatives back home.

Sandy and I jokingly called each other “the dearest friend I’ve never met.”

“You have become such a good friend without our ever having met and I feel as though I have known you forever,” she told me recently. “One of these days I am coming up and taking you up on using your house for a few days…that is such a sweet offer.”

How I wish we could have shared that cup of tea at my kitchen table, and a couple of Gram Martin’s toffee squares. Sandy, I’ll miss you so much.

20 thoughts on ““The dearest friend I never met””