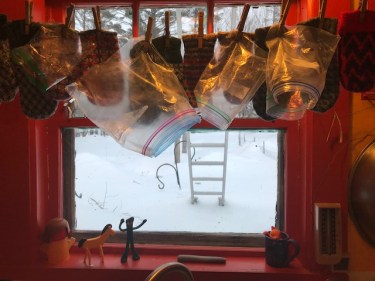 When I was growing up, I always feared that when my friends came over, they would notice what was hung out to dry on the clothesline in our backyard.

It wasn’t just that my mom, who was almost a full generation older than many of my friends’ mothers, wore the world’s most inelegant underclothes (think yellowed long-line bras, hideous girdles with dangling garters, and opaque tan support stockings) or that, in the interest of thrift, we continued to use our sheets and towels until they were faded and ratty.

No, the real embarrassment of our backyard clothesline came from my mom’s practice of washing out plastic bags and hanging them up to dry.

Bread bags, sandwich bags, cereal bags—there was no such thing as a “single-use plastic bag” in my mother’s vocabulary. That remarkable invention, Ziploc bags, first appeared in 1968, and it’s quite possible that when my mom died in 2004, she was still using and reusing the first box she ever bought.

In later years, living alone, she turned off lights and appliances whenever she wasn’t using them, and even regularly traipsed down to the basement to shut off the circuit breaker for her electric water heater. (“I’ve found I only need to turn it on about every second or third day,” she said of the water heater. “The second shower is kind of lukewarm, but I don’t mind.”)

And she used a serrated knife to slice new rolls of paper towels across the middle before putting them on the dispenser because she had figured out, long before the “select-a-size” marketing people did, that half a sheet is almost always all you need.

As mortifyingly embarrassing as all of these practices were when I was an adolescent, not only did they eventually become a source of pride for her adult kids (our mom was an environmentalist before it was cool!), but now we do many of the same things in our own homes. (Steve’s peanut butter jar collection is legendary.) Well, maybe not the water heater circuit breaker thing, but I bet at least one of us environmentally conscious cheapskates has experimented with a timer. (I suspect you, Greg.)

It turns out that Mom was onto something.

Residents in the town next to mine are currently considering a proposal to ban single-use carry-out plastic bags in town businesses. It’s a hot-button issue that has a lot of people talking, and arguing. 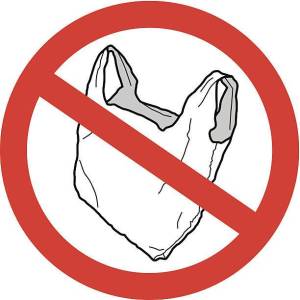 To promoters of the ban, it’s one small thing we can do to help save the environment from a fraction of the upwards of one trillion plastic bags that are currently used each year, of which the vast majority (about 99.5%) are not recycled.

To opponents, it seems like a big step to give up the convenient handled plastic bags we’ve all gotten used to using to carry our groceries home in, and remember to bring reusable cloth bags to the store with us instead. In addition, some retailers object vociferously to being told how to run their businesses.

And some people just can’t imagine how they’d dispose of used cat litter without plastic grocery bags. With three cats, I admit that thought crossed my mind, too.

Thinking about the proposed ban, and participating in a few discussions about it, has gotten me reflecting about single-use plastic bags in general, not just carry-out grocery bags, and how pervasive they are in our lives.

We start each morning with the daily paper, which, even though it is delivered to a relatively weatherproof box, lately comes encased in a long, skinny plastic bag. I top my breakfast yogurt with blueberries and raspberries from plastic bags in my freezer, and Tony opens another plastic bag to take out bread for toast. Cereal comes in boxes lined with plastic bags.

As it turns out, all of these plastic bags, which I used to toss in the trash, make perfectly serviceable receptacles for used cat litter. What a revelation!

Plastic bags take centuries to decompose in landfills, and as they do, they slowly release toxic chemicals into the soil.

In fact, they never completely degrade, but instead wind up as microplastics, bits of plastic that range in size from microscopic to less than five millimeters long (about the size of a grain of rice), cause a host of environmental problems and, ultimately, end up in the food chain. Microplastics have been found not only in seafood, but in sea salt, beer, bottled water, and tap water.

Worldwide, we use over one million plastic bags per minute—most for only a single, temporary use, like bringing home groceries, carrying out the trash, or holding frozen peas.

Mom might have rinsed out baggies because she was a cheapskate, but she was also doing her part, long before the creation of the EPA, and years before we first celebrated Earth Day, to help save the planet.