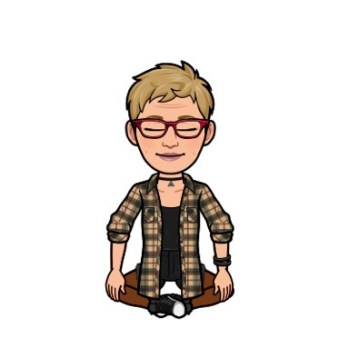 There is a Zen proverb that says, “You should sit in meditation for twenty minutes every day—unless you’re too busy; then you should sit for an hour.”

I was asked recently to write a few paragraphs for a future issue of our monthly church newsletter on the subject of “Why I go to church.”

With no particular deadline, I’ve been treating this assignment as I do most open-ended obligations, which is to say that I’ve pushed it to the back of my mind and given it no thought whatsoever.

This past Sunday morning I was sitting in church at the start of the service, wondering to myself why I was there. I had left a lengthy and detailed list of things that absolutely had to get done before the end of the day on the kitchen table at home, and attending church was not on it.

My list included such pressing tasks as “Go to the dump” (it’s not open again until Wednesday, and something in the kitchen trash was starting to smell rather ripe), “Write essay for writers’ group” (how many months in a row can I bring a piece of writing that’s either old or unfinished before they start thinking about kicking me out?), and “Make Oreo turkeys” (I know: this one may not sound 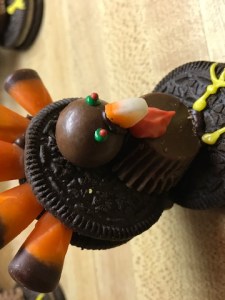 pressing, but I’ve made these ridiculously fussy creations out of Oreos, miniature peanut butter cups, malted milk balls, and candy corn every November since 2010, and I’ve sent a dozen or so to the Shakers at Sabbathday Lake every year since Will started working there, and this is the last November that he’ll be there, and how could I even think about disappointing Brother Arnold?).

My list also included a number of things that should have gotten done that day, but which I knew perfectly well probably wouldn’t, like making a Christmas tree out of dowels to display ornaments in the Museum Shop at work (I still had another eleven days to get it done before our Black Friday sale, so the project probably wasn’t last-minute enough to rise to the top of my mental panic list), completing the library’s annual fund mailing (a task with which at least five people on the board of trustees had offered to help, but which, instead, I was doing all by myself because I don’t know how to delegate and besides, I wanted it done right), and cleaning the bathrooms (with any luck, now that early winter ice has made my driveway so treacherous, nobody who doesn’t live here will see my bathrooms until spring anyway).

The First Universalist Church of West Paris is more than a century old, and it has the most amazing 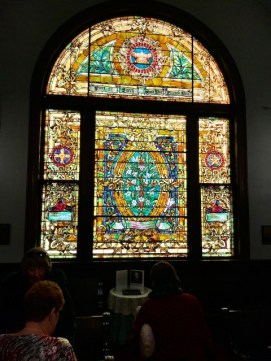 original stained glass windows on all four sides. On sunny mornings, like last Sunday, the large window in the east-facing rear wall of the sanctuary positively glows. It can lift your spirits just to look at it—even if you’re heading home after the service to take out the smelly trash, and glue Oreos and candy corn together with sticky icing.

Unitarian Universalists are my people, a fact that is brought home to me nearly every Sunday, not only by the readings and sermon topics, and the spirited discussions downstairs over refreshments following the service, but also when I open the hymnal and see that we’re going to be singing about world peace, environmental stewardship, or social justice.

Where else can I go and join a chorus calling for “Bread and Roses,” echoing the voices of the women who marched in the textile strike in Lawrence, Massachusetts in 1912?

Where else will I get to sing my favorite UU hymn—Holly Near’s “We Are a Gentle, Angry People”—and think deeply about what it means to be both gentle and angry, to be “singing, singing for our lives”?

That morning, as the service began, my mind was active, unquiet, searching, filled with random thoughts. I wondered if I would be home by 11:00, and, if I was, if I would have enough time to get out for a short hike after going to the dump, and still get back in time to write that essay and make those turkeys and possibly, although not likely, scrub a toilet or two.

I wondered how I was ever going to get everything on my list done, and if there was ever again in my life going to be a time when I didn’t feel overwhelmed by tasks and responsibilities and meetings and projects and lists.

I wondered if there was anything, anything at all, that I could do, while sitting there in church, that would advance my progress on any of the pressing tasks on the list at home on my kitchen table.

And when I realized that there wasn’t a single thing I could do about any of it, I suddenly understood why I was there. The feeling that washed over me was unfamiliar, but so welcome, as if I had been unknowingly longing for it.

The feeling was stillness.

There are weeks—too many weeks—when just about the only waking hour during which I don’t check something on my phone, fret about falling behind, or wonder if I have my priorities straight is that hour when I sit in church.

I don’t always go, but when I return after a week or two away, sitting in that wooden pew can sometimes feel as luxurious as sinking into a featherbed.

So, although I may go to church for the stained glass, or for the words of the speaker, or for the fellowship, or to sing about bread and roses, or even for the refreshments, there is one thing above all the others that keeps me coming back, one thing I don’t find anywhere else, except perhaps, at the top of a mountain.

I come because I’m too busy to sit in meditation for twenty minutes. I need to sit for an hour.

I come for the stillness.