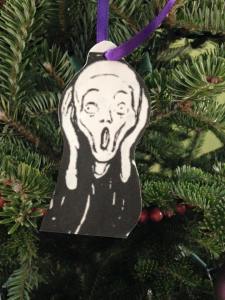 I’m just going to go ahead and say it: I’m glad Christmas is over.

I am the mother of one adult daughter who is so devoted to the holiday that I suspect she was switched at birth with an elf baby, and another who starts drinking peppermint lattes and watching—and quoting from—Christmas movies by mid-November.

I come across as Scrooge-like by comparison, merely because I refuse to listen to Christmas carols, watch Christmas movies, or bake a single Christmas cookie until at least a day or two after Thanksgiving.

Don’t get me wrong; it’s not that I don’t like Christmas. Although I’m not very religious and I detest the rampant commercialism that is such a big part of the holiday, there are, in fact, many things I actually love about Christmas, like the focus on family and friends, the fact that people—on the whole, at least—seem so much more generous and kind around the holidays, and the smells of cinnamon, ginger, cloves, peppermint, and balsam fir.

(When my oldest brother’s kids, who are now in their 40s (gulp!), were little, they had this classic scratch-and-sniff Golden book. It was brought out only around Christmas, and I loved reading it to them.)

But the holidays always have a way of leading me to spend too much, eat too much, do too much, miss my mom too much, and get all nostalgic for my childhood, a time when I felt none of the onerous responsibilities of Christmas—and all of the magic.

Because Christmas—even when your kids are grown and you no longer have to count the number of gifts for each under the tree, rush out on Christmas Eve to buy one more stocking stuffer to make those come out even, and remember that Santa (and only Santa) uses the red-and-white-striped paper to wrap his gifts—is a lot of work.

Specifically, at least in the circles I travel in, it’s a lot of work for women. Christmas is so much work for women that it often puts us completely over the edge long before The Actual Day.

My best friend Donna, two other high school friends, and I started the contest back when we all had long gift lists, young children to thrill and fulfill, houses to decorate, and slight-to-moderate Martha Stewart complexes. It was the 1990s, and we were, to use a pop psychology term of the day, Women Who Did Too Much.

It started with an exchange of emails asking each other, “Have you cried yet this year?” and sharing stories of our own personal meltdowns, which included, over the years, such Last Straws as husbands who were not properly sympathetic/grateful/impressed with our efforts, kids who had suddenly outgrown the magic, and, once, low-fat baloney.

Eventually, we turned it into a tongue-in-cheek contest that kicked off each year on December first, with the first person to have a holiday meltdown declared that year’s winner. (There were no prizes, other than the sympathy of the other participants, and the knowledge that they would soon follow.)

In recent years, as our kids got older, as we gave up trying to be Martha, and, perhaps most significant of all, as we approached what we now like to call “the f— you fifties,” we began to notice that we were getting through entire holiday seasons without tears. We did, however, all start to notice a new manifestation of holiday stress—instead of crying, we frequently felt like hitting people.

[Note: when teenagers and young adults text “WTH,” it means “what the hell?” When women in their fifties text “WTH,” the translation is “want to hit,” as in, “Jerry lost his wallet again—WTH!” or “Tony has the TV up so loud I can’t think—WTH!”]

This year, when Donna reminded us on December 5th (because we’ve also become forgetful) that the contest was underway, she said, “I suggest we alter the guidelines. Now that we’re menopausal, peri-menopausal, or ‘periwinkle,’ as Jerry would say, share if you hit someone during this holiday season (that’s the true winner), or share the meanest thing you’ve said this month…As I remember, there was a lot more crying about the holidays when we were younger. I guess that was because we were trying to make super special, wonderful, magical holiday memories and now we just don’t give a s**t.”

We had a pretty low-key Christmas here, but I still managed to put up a tree and some outside lights, buy and wrap a few gifts, and bake 1,643 cookies. I haven’t hit anyone this December, and although I thought a lot of mean things, I think I refrained from saying any of them aloud. I shed a few tears, but they were more the sentimental kind of tears than the meltdown kind.

Our friend Lynn easily won the contest this year, by crying in her car in the parking lot of Market Basket before going in to buy supplies for the neighborhood Latke-fest that she and her husband host each year. But personally, I think being married to a Jewish guy and thus having to celebrate not only Christmas, but also Hanukkah, gives her a slight advantage.

One thought on “Christmas Crying Contest”